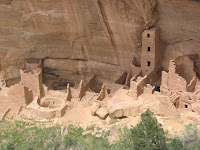 It's been steady progress at work, with us making thwarting thistles, knapweed, toadflax, and other noxious weeds. We'll soon be trained in chainsawing to begin fighting tamarisk growing in a few areas of the park. Fire season is also upon us, and recently the fire crew has been short staffed as a portion of their team is in Arizona beating back a wildland fire started by a sloppy camper. Four of us on the natural resources crew have red cards, so a few of us were called in to fill in weekend dates, and were outfitted with linepacks and associated gear. 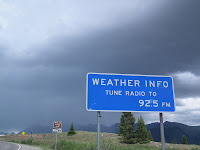 I passed on the first round of overtime, since I had some family come in for a nice visit. We had a lot of catching up to do, since my brother works as a contractor for NASA's manned space program that is currently in the process of reinventing itself as the space shuttle is retired. They met me at Mesa Verde and we toured Balcony House, Spruce Tree, Sun Temple, Far View, and a few other sites, which made for a full day. I was hoping we could check on the status of the parrot figurine from Yucca House, but I'll have to find out another time. 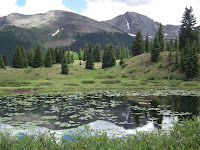 We spent a day rafting the lower Animas River in Durango, and the next day saw Cascade Falls in Ouray. We saw a bear cross the road at Pinkerton Hot Springs. That worked up our appetite, so we scarfed down some Mouse's Chocolate and then went to a local pub to watch the sunset. It was a busy holiday weekend and the hot springs were packed like sardines. My brother's family went on north to visit with more relatives, and we went in search of a campsite. The nearby Forest campgrounds were all full, so we drove to Dallas Creek and found a nice gravel patch along the roadside to call home. 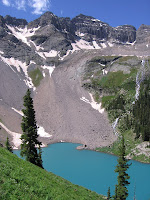 Dallas Creek is the trailhead for the hike we did on the 4th of July. It goes up into the Mount Sneffels Wilderness to the Blue Lakes, which is some spectacular alpine scenery. Snow banks along the mountainsides were melting into cascades, all of which fed into a strangly blue lake. The water clarity was somewhat clouded by glacial flour from the slow moving rock glacier on it's south shoreline. We explored the shoreline to get a few nice views of the nearby waterfalls, and then trudged up to the upper Blues. The trail is very steep and messy at first, probably because the original trail washed away. After about half a mile, it improves and the going gets much easier. 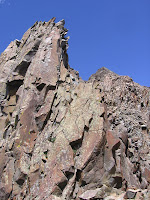 At the upper lakes, we had a nice lunch and just soaked up the incredible vista. Mount Sneffels just seemed sooooo close, I figured I had to try it while I was there. The hike up to the saddle was fairly easy, and I could see all the silly jeepers below bouncing around the Yankee Boy parkinglot on the non-wilderness side. A study in contrasts. Mount Sneffels summit sits outside the Mount Sneffels Wilderness, and I suspect someone in the jeep touring industry can explain that irony.

From the saddle, the route quickly became interesting. It took some focus and gumption to scramble around the pinnacles guarding the South Ridge couloir. Once past the couloir, the summit loomed above, not looking much easier. The wind tried to convince me to turn around, but it slacked off and after a few 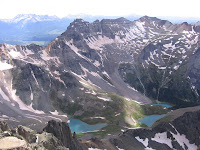 moments of wondering what I was doing, I was on the summit with 3 other nice folks. The view was amazing, and I tried to take a few photos, but as always they don't do justice to grand scenery of dappled sunlight racing across distant ridges, etc, etc. I went back down immediately, and began the hike out.

We celebrated in the hot springs as a rain storm came over the mountains. We watched the fireworks and began driving back home in the dark. After midnight, we began singing the Deer Patrol song to keep us alert, as we passed many a mulee munchin on the roadsides (one was taking a dirt nap). It was a great holiday weekend, but now it's back to work.
Posted by Mangrove Tom at 8:59 PM