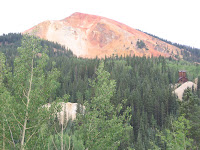 The summer "monsoons" have begun in the rockies, and for the past two weeks we've enjoyed watching the storms build each afternoon. The humidity is much higher, but the clouds and cool breezes make it very enjoyable. I was hanging laundry as a storm raged in the nearby La Plata mountains, and watched the inflow from the storms flap the damp clothes dry and draw that vapour to feed the maw of the thunderstorm. Isn't it strange how we can perform routine tasks while a phenomenon with several times the power of an atomic bomb rages just a few miles away?

The summer rains are always welcome here, and the plants are greening up again. Also importantly, the rains have greatly reduced the chance of fires, so that's one less thing to worry about. Mesa Verde National Park and adajacent Ute Tribal lands have seen 4 fires so far this year, each caused by lightning, and each caught and snuffed out before they had burned more than a third of an acre.

Lately, the vegetation crew I work with have been assisting other researchers. There's two teams doing different bird-banding surveys. One team is doing many surveys in different locations across the southwest. The station I helped at had several nets along route almost one mile long, which required frequent checking, which adds up to a lot of walking. It was a slow day, but we caught a black-throated gray warbler, and several ash-throated flycatchers. Another team is focused solely on hummingbirds, and most of the work is done by volunteers. The morning I helped, we caught over 50 birds, with only 3 that had been previously banded. The rufous and black-chinned humming birds are migrating through, so there's lots of turn-over during these weeks. The broad-tailed hummingbirds seem to stick around though. It requires certification to band the birds, so the poor researcher in charge of the station was constantly busy taking measurements and placing on bands. Fortunately, we can close the nets so we don't get too many birds at one time.

Another researcher, who is a new employee at Mesa Verde, has big plans for the park. When the park was first established, natural resources were not really protected very well, and for a variety of reasons many species began to dissappear. His goal is to reevaluate the habitat for some of these missing species that belong in the park and determine if conditions are right so that they can be reintroduced.

One of his first priorities is gathering data for Big Horn Sheep reintroduction. It's a complicated problem, especially since nobody is really sure which sub-species of bighorn lived in the park; were there once Mountain Bighorn or Desert Bighorn? There's many factors that go into making a decision, but the one part my team has been helping with is going out into the field to perform terrain-coverage estimates. We do random transects across the terrain, and at several points within a transect, measure the amount of coverage a sheep would experience. Bighorn prefer a mostly open terrain, where ambush predators such as puma can be seen from a safe distance (14 meters). So as we hike along to each point, one of us crouches down to sheep-eye-level (90 cm) and the other drags a checker-board to the North, East, South, and West 14 m away and determine how much of the board can be seen. If you glace at a map of MEVE and draw about 50 points, with each point having a line 140m long in a random direction, and then look at the terrain, it is clear that this involves some challenging hiking. It's often an adventure, and we've seen interesting fossil beds, anazasi ruins, and lots of wildlife.

The rainy weather has impacted both work and play, and we've been limited to day trips in the area. I really enjoyed a hike along Red Mountain pass; one trail followed a cliff edge around a canyon, and another went past the old Joker Boarding House and up to an old mine and mill site way up on the mountain. Long ago (how long I shall not say), I explored this area and the mining tunnels were oozing really vibrantly-colored goo that was as clear a warning sign of toxicity as any aposematic coloration in nature. It looked like something Dr. Jekyll might keep in vials. Fortunately, much money has been spent to try and clean up and reclaim the soils and water of the area to keep the toxins from contaminating both people and wildlife. Many of the old tailings have been worked into large leach fields (about as pretty as it sounds), and water from the Joker tunnel is now channeled into a small canal that has some weird string-alage growing in it, which I think was planted to help eat the acids and perhaps even store some of the heavy metals. I'd like to know more, so if anyone has some info, please share it.

The rainy weather has finally given us some downtime to go into town and see some traditional Ute dances and listend to a Navajo Code Talker down at the Cortez Cultural Center. I hope we have good weather next weekend, since I'm ready to go hiking again.
Posted by Mangrove Tom at 12:56 PM