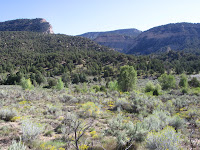 The news from the Natural Resources department of Mesa Verde is a little stranger than normal. It begins with the reports of 6 stray cows ( 3 cows and 3 calves) found within the boundary of the Park. Since the cattle have been hanging around the fence at the southern border, there's suspicion that they snuck across. The biologist thought that we could get 4 members of the veg-crew to sweep down from the top of Navajo canyon, chase the cattle before us, and then be joined at the confluence of Spruce and Wickiup canyon by a posse of Rangers and the remaining veg crew. 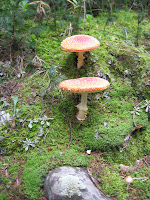 Being a Texan, I felt it was my duty to join the vanguard. We swept down the top of the canyon, and after a few miles began seeing cattle tracks, but no cows. With hopes that we were driving the cattle before us, we kept moving down canyon, with 2 of us climbing up on the canyon slopes periodically to ensure cows weren't hiding up on the benches of some of the canyons. The long story short is that we were outwitted by the cows, who probably smelled a trap in the making and ran up the west fork of Navajo canyon. We never saw them that day, but did shore up the fencing. I think plan-B is to find some real cowboys.

For recreation, we took the 4 day holiday weekend to backpack into 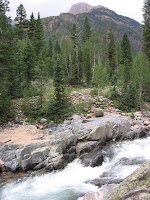 Vallecito canyon. Before reaching the trailhead, we drove by Vallecito reservoir, which was site of the 2002 Mission Ridge wildfire that burned the same year Mesa Verde had its worst fire season. The fire burned so intensly that embers spotted new fires on the opposite side of the lake. It doesn't take a genius to realize that if a lake doesn't work as a firebreak, then there's not much one can do to stop it. Just like the Boulder blaze that's currently burning, it is likely that the fire was human error. The fire is commemorated in a Trail of Carvings.

We had a great backpacking trip, with the weather nice enough to just rain while we slept. We saw waterfalls and many new peaks, such as The Guardian, and Mt. Silex, and hardly saw a soul in the backcountry. While hiking up the river, we mentioned how it was perfect habitat for a moose... Mooseatat! We were really thrilled when hiking back to camp, there was a bull moose staring back at us. He didn't trust people, so he's a smart moose.

Work continued with a few other intersting activites, such as UTV safety training, the last day of the hummingbird project (thanks to the volunteers of the Hummingbird Monitoring Network!), and the release of Roundtail Chubs into the Mancos River canyon. The Colorado Division of Wildlife is raising the chubs from stock saved from Mesa Verde during a severe drought when 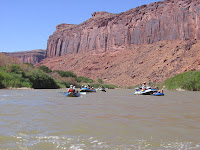 irrigation had depleted the river so much that it no longer flowed. Hopefully, these efforts will restore the species back to healthy levels.

We celebrated the release by going on an overnight rafting trip down the Colorado, right along the boundaries of Arches National Park in Utah. Floating down the majestic canyons was great, seeing the Fisher Towers and Red-necked Phalaropes was sweet, but the icing on the cake was seeing a family of river otters swim and scamper along the shoreline.
Posted by Mangrove Tom at 8:15 PM