It is finished: another season at Mesa Verde just ended and we're on the move again.  Almost all of my final day was spent hiking down a canyon I had never had the chance to explore yet: the aptly named Long Canyon.

Our goal was to investigate springs that in recent history were described by Marylin Collier as having pools of water.  One site was a thicket of Forestiera neomexicana, the New Mexican Privet.  It had lots of tiny blue berries and bright yellow leaves in a nice autumn show, but the thorns make it somewhat stand-offish.  The next site was high up on a cliff and took some serious hiking to reach, and had a grove of 20 Populus fremontii (fremont cottonwood) trees, but like nearly all the springs in the park, no surface water.  The final site we visited had a pool of water, but was trampled extensively by feral horses and cows so that the riparian community was no longer intact and worth investigating for a long-term monitoring project.

This past season is the 2nd driest on record for Mesa Verde, and the area is in the 11th year of a persistent drought, so it is really having a toll on the hydrology.  We had intended to explore another spring far up the canyon wall, but did not have enough time.  Instead, we visited a large sandstone arch below Springhouse Ruin.  A great finish to my last hours working.

For weekend fun, we drove down Last Dollar Road, a scruffy mountain pass that connects the Telluride basin to the Dallas Divide.  The quaking aspens were just gorgeous, and the weather had a crisp, cool edge after the first snow fall.  I hiked through a little snow up one of the nearby peaks called Whipple Mountain, and somewhere up there I lost my Fire Crew hat.  We finished hiking around and then went for an extended soaking session in the hot springs of Ouray and ate a delicious meal at the Ore House Hotel.

We camped again at Angel and the morning was frigid.  We drove up to Camp Bird Mine, which is being reopened to process tailings and perhaps mine a bit more ore from the mountains.  The road was in great shape, but we decided not to push our old truck too much and turned around shortly past the mine.  I explored a small creek coming off the mountain, which led to a series of waterfalls and another set of "Baby Bathtubs".  After that, we went for a hike up the steep switchbacks of Weehawken Trail. 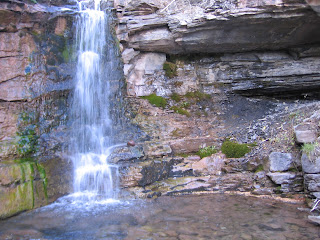 We're going to miss the scenery and adventure of the Four Corners.  I wonder if we will return or if the future holds something different for us?

For now, it's on the road again!