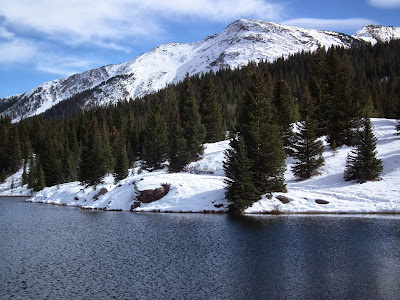 See the geese in chevron flight flapping and racing on before the snowThey've got the urge for going, they've got the wings to go
They get the urge for goingWhen the meadow grass is turning brownSummertime is falling down and winter is closing in
I'll ply the fire with kindling and pull the blankets to my chinAnd I'll lock the vagrant winter out and bolt my wandering in
-- J. Mitchell


It's amazing to realize another year at the Four Corners has passed.  It was a strange ending to the season; I only felt half present on the hectic last day of work.  I looked for the ravens that had greeted me many years ago, but they were elsewhere.  So at the end of the day, I went to the south wall of Pipe Shrine House to see the stone spiral, and then hurried on to watch a cold sunset over Point Lookout.

We had a short break before moving, so I took the chance to return to Silver Mountain.  The last of the aspen leaves were falling, and the overgrown path to the old mine near tree line fit my mood.  From there, it was a steep hike up to the ridge where the frosted summit waited.  Strange to think I will likely never stand on this mountain again.

We took our last weekend to do the Great Circle drive around the mountains.  Scotch Creek, where we began our season, was again covered with a dusting of snow and ice forming along the rocks in the stream.  Since the trails were going to be muddy at altitude, we instead went to a small park south of Ridgway along the shores of the Uncompahgre, where a magnificent eagle statue was frozen in mid flight.

We then spent a nice anniversary evening at a bed and breakfast in Ouray called the Secret Garden.  The room was so comfortable, we slept in late and missed our morning hike.  We stopped at Jackson Lake to dig snow out of the grill at the picnic area and roast some hot dogs, as a meek attempt to appease my need for a campout on our last weekend.  At least the ravens in the cold mountains took notice of our activity!

Again, before I was ready, it was time to hit the road one last time for the final journey back to Texas... where Jury Duty, Dentists, and broken appliances await my return.