Thoughts from the Swamp 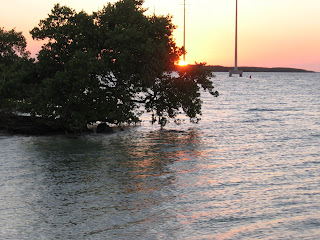 It looks like I'll have to rely on weekly updates to this blog, since opportunities to write are few and far between.

I wanted to thank the most important person in my life, my wife, who helped me with everything in making this adventure happen. There was scant time to prepare for this trip, so many things had to be resolved before leaving home for many months. I could not have made it here without her.

During the long drive from Dallas to Tallahassee, I drove through heavily logged areas. This large scale impact of human activity is one reason why protecting our remaining biodiversity is so important. The last stronghold of the Ivory Billed Woodpecker was the Singer Tract in Lousiana, and an ornithologist had just enough time to describe the species before the forest was felled and the largest woodpecker in the USA plummeted towards extinction. It's reliance on the dynamics of old-growth forests was incompatible with unsustainable logging practices.

Another ghost of south-eastern woods is the Carolina Parakeet, the one and only parrot of the USA, which was last seen in 1918. This parakeet was an important seed disperser of the bald cypress and kept many weed species in check. Unfortunately, humans did not value those traits and deliberately destroyed them. Now that large areas of these former lands are dedicated to lumber and agriculture, and the even-age stands of young trees, often a monoculture stand, quickly begin to lose their diversity. Should a commonly occurring insect appear, such as a pine beetle, it causes severe damage because the woodland resembles a corn field more than the original robust and dynamic forest that has been lost. The predators have been extirpated and the other tree species are gone. The forest, and all that depend on it, suffer catastrophically.

Ecologists with a global view often compare this "Pale Blue Dot" to an airplane, with species forming components of the airplane. Some species are integral to the entire plane flying, and without understanding how the entire plane functions, it is a death wish to begin randomly destroying its components. How many rivets can be lost before the whole thing falls apart?

As I drive on, I see a bald eagle perched on the snag of a long-dead bald cypress in the Henderson swamp. I'm reminded that thoughtful action is a positive counter to these ecological issues, and I know why I'm leaving home... to make a difference.

Monday, Nov 12 - There and Back Again

I drive across the Everglades, and then the Keys. I see many birds; ibis, hawks, egrets, and even a wood stork. I reach the keys as the sun begins setting, and take a few photos. I have returned after a trip 19 years ago to dive the reefs. Now I'm back! I meet up with my new new team and some other nice folks for an evening of volleyball. We are graciously invited to sleep at someone's house; where we're fed pizza, beer, and a soak in the hot tub! What a great welcome!

This is my first day as an employee of the organization I've been a member of for the past 15 years. I'm now officially an Exotic Strike Force team member. We're introduced to the friendly, highly motivated staff and fed more pizza! Our first task is to inventory the gear we will be using in our work: chainsaws, chippers, herbicides, mattocks, and information. Knowledge is power, and knowing which species are most invasive, where they are located, how to effectively treat them, and a strategy to accomplish it all is our most effective tool of all.

We begin the day with a quick drill into using the GIS system; Trimble units loaded with ArcView & custom TNC weed management software. 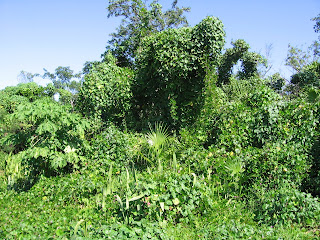 After that, we meet with Randy Grau, a Wildlife Biologist from the Florida Fish & Wildlife Conservation Commission. We toured conservation land on Marathon Key that had a variety of invasive plants along the perimeter. The interior had yet to be properly sampled, so it is a work item of concern. The adjacent airport land contains excellent habitat, but also is becoming infested with some of the alien invaders.

After checking out on how to operate the chainsaws and monster chipper, we meet county botanists that manage many of the public lands. Most of these public lands are conservation easements that are created through a permit process for development which requires mitigation for loss of habitat. Tina & Gary are already on site along Hwy 1 at Ramrod key. Both of them are very knowledgeable about native and exotic plants, and they show us stands of healthy Lather Leaf trees that are growing up from an area that had been previously treated.

The problem is Lather Leaf can grow from just branches dropped on the ground & it also a prolific seeder. The berries can float on the ocean and colonize new beaches. We had to be very careful to pull them up by the roots and chip them into mulch. If the berries were turning red or brown, we needed to bag them so that the chipper wouldn't end up spreading their seeds across the site. These characteristics make Lather Leaf one of the most aggressive invaders, since hurricanes can actually result in greatly spreading it to many sites and regenerating from falling branches.

After that warm up, we visited another site that was infested with Brazilian Peppertree. This plant produces massive amounts of berries, and has no grazing pressure or diseases adapted to its presence, so it can quickly overtake a disturbed lot faster that native species. The sapwood is a pretty pink color. We work very hard and make a few mounds of mulch from them, but hardly make a dent in the strand.

The day was closed with an introduction to Mother-in-law Tongue. This is an ornamental that has escaped yards and now growing in tight clumps along wetlands. It propagates from a running tuber that must be dug from the ground. Nearby Lead Tree is yet another invasive, and we work to collect the seed pods from dispersing to adjacent lots.

A cool front blew in this morning. Even the key deer seemed to stay hunkered down to escape the cold in the dawn hours. We toured some areas along Big Pine with Ben from the F&W service. It's clear there is a lot of work to be done! Another afternoon of studying the GIS software and reviewing our employee benefits and responsibilities. We are graciously invited that evening to attend a party from a long-time resident and employee of the Key Deer Wildlife Refuge. 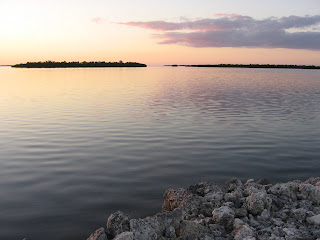