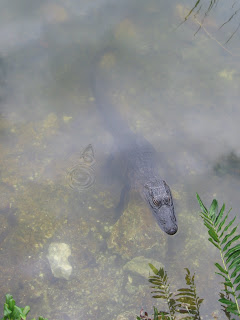 Last week went by really fast. We started Monday with a thorny problem: Night-blooming Cereus, which is a cactus that sometimes thinks it's an epitphyte. It can climb into trees when nobody is looking and grow so top-heavy that it topples palms and breaks branches. We filled up several truck loads of cactus, leaving the space open for the native barbed-wire cactus to move in. It was hard work!

On the way home, we pass by a neat place in the Key Deer National Wildlife Refuge called the "Blue Hole". It's a natural sinkhole in the limestone that has a lens of fresh water that sits atop a denser layer of salt water, creating a nice pond for wading birds, fish, and alligators!

Tuesday was another rough day, as we needed to survey a hardwood hammock in Marathon. Hammocks are the name for the dense climax forests, which have a high species diversity. The plants can grow quite dense, and walking through it is very challenging at times. Most hammocks are thought to be resilient to invasives, since the native vegetation grows so dense that it crowds out any newcomers. However, some invasive plants can make a strong presence in them, particularly after a storm creates a disturbance. We saw 10 different species of potentially aggressive invasives there: Peppers, papayas, asparagus fern, lead tree, seaside mahoe, coral vine, and others. Trying to treat all these areas was physically demanding, and at some point during the day, my sunglasses were ripped away and never seen again! 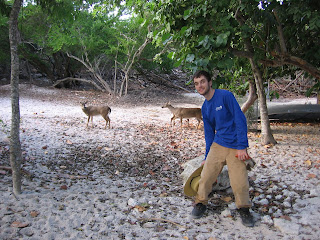 Fortunately, our last day before the holidays was picking periwinkles at the beach! This is a photo of my coworker, Toto, introducing himself to these endangered species. Periwinkles are very hardy and reseed themselves. They are pretty plants, but have no wildlife value. There were some key deer out to visit us at the beach too, along with someone's friendly parrot.

After that, it was a quick trip to pack and then join the throng of folks at the airport, all trying to do the same thing -- get home to family for Thanksgiving.


Thanksgiving was in Texas, where winter was making its presence felt. After a short visit with lots of food, now I'm back, and ready for more!
Posted by Mangrove Tom at 8:27 PM

Who knew life in the Keys could be so hard!