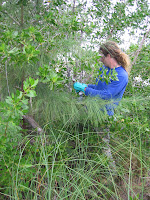 After my plane landed (late), I hit the ground running. Monday we spent finishing up the work we didn't complete before Thanksgiving; mostly controlling periwinkle, kalanchoe (more aptly named, Mother of Millions), and a few rogue australian pines. Each plant has an interesting story behind them. For instance, the Madagascar Periwinkle contains complex alkaloids that are used to treat childhood leukemia. Unfortunately, it is native to Madagascar, which is a huge island with an enormous environmental problem. As with most species indigenous to that beleaguered land, the periwinkle is endangered in its natural environment. Here in the keys, we it is an invasive that threatens our own endangered species. This photo is my coworker Topher basal treating some pines.

It began raining, so we caught up on office work: mostly verifying the data for our assessment and treatment work was correctly entered into the Trimble units. Toto also researched the growth histories of our target plants, trying to determine when the best time to treat them so that we could reach them prior to seeding. Since the Keys are tropical, the growing season of some plants never really stops, so prolific seeders like Lather Leaf and Periwinkle are not subject to timing. Grasses tend to be the most faithful to obeying a season, but they tend to seed in the early fall. That would mean treating grasses in the summer, when the heat would make us wilt faster than the grasses. 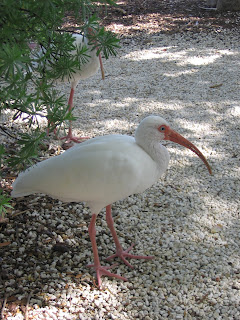 The next morning was very early; we woke up at 5am to drive down to John Pennekamp state park. This is an excellent park to visit, with an aquarium, lagoon, and a dive shop that offers snorkel and dive trips on the park's reef. We setup camp in an area near the old drill site. They were looking for drinking water, and found it 1000 feet below. Unfortunately for humans, it was a warm mineral artesian spring that reeks of sulfur. The water drains up from the drill site and feeds a small pond that nurtures what appear to be the majority of mosquitoes and no-seeums for Key Largo. Ugh!

The Nature Conservancy organized a two day course to teach the various Greensweep allies techniques in how to successfully treat different invasive species, and also how to identify invasive and important native plants. Considering there are over 3000 plant species living in the keys, this is a ton of information dumped in a short time. We also learned about other invasive pests, like 6ft pythons attacking the closest thing america has to a koala bear: the endangered Key Largo Woodrat. In one of the brackish channels, we saw a crocodile; the first time I had seen one in the wild!

After that intensive course, we prepared for and then took the Florida Core and Natural Areas licensing exams. I sure hope I passed (the Natural Areas exam was zomg intense; example: is the ester form of Triclopyr best used on monocots or dicots)! 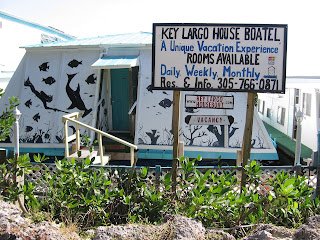 The weekend was more fun. Saturday morning, the Looe Key Reef Resort hosted a garbage cleanup on the reef. Free dive trip, free beer (afterwards), and great karma. I only recovered a few pieces of garbage, which was great because the reef seemed very clean. Unfortunately, I heard that just a few days ago, a drunken party barge ran aground on the reef. They were hit with $3 million in fines, but I'd rather have the coral back. The western edge of the reef patch we were on was shallow, with a max depth of 30 feet. There were coral ridges with sand channels in between. We saw several large nurse sharks about 7ft long! Also, a large stingray was hiding below the sand with just his eyes and tail poking out. At first, I thought his tail was a fragment of fishing rod! There were also some bahama grouper, queen & french angels, tricolor damsels, hogfish, yellowtail snapper, bluehead wrasse, barracuda, schoolmasters, porkfish, squirrelfish, soapfish, triggerfish, smooth trunkfish, blue chromis, midnight parrotfish, and lots of others I couldn't identify or remember long enough to log.

Today, I went on a long kayak trip around Howe Key with Toto; about 6 miles. We saw many juvenile hammerhead sharks about 3 feet long, and a stingray. The bays are very shallow, often only 1 ft deep, with seagrass growing right to the surface. This makes for challenging work. We did get to see a bald eagle, several osprey, cormorants, great egrets, and most importantly, the rare white morph of the Great Blue Heron! Indeed, go tell your friends, as my lifelist now includes Ardea herodias occidentalis!