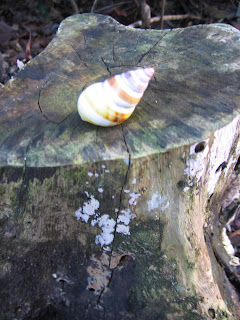 Originally, hardwood hammocks on the Keys were considered pristine areas that would be very difficult to invade. They are a climax forest, meaning that the growth progression from a disturbed site is complete when mature hardwood trees have established themselves, taking up most of the sunlight available in the canopy.

Therefore, we began our workweek treating the edges of the Blue Heron Hammock on Marathon Key. There were lots of Lead Tree, Asparagus Fern, and Jumbie Beans to keep us busy. Treating these plants was tedious, since required harvesting pods & berries to prevent reseeding. After that was done, we began a transect into the interior of the hammock. It was very thick undergrowth, but unfortunately not pristine. It took nearly two hours to walk about a half mile. We killed thousands of papaya trees along the way, so the blades of our weapons (Peppersbane, Texas Chainsaw, etc) dripped heavily with green sap. Some infestations were so huge that our team could not effectively treat it, such as dense thickets of Sansevieria with stalks over 6ft tall!

The remaining work days we covered public land on Big Pine Key. The pine rocklands are more open than the hammocks, but the rocklands most prevalent shrub is the Poisonwood Tree. Poisonwood causes severe skin rashes similar to Poison Ivy, so we wear gloves and long sleeves, and frequently wash up. Fortunately, it is a native, so we merely try to keep away from it.

Occasionally, we see wildlife; key deer, also called "toy deer" because of their tiny size, are common on Big Pine. Adult deer weigh only between 60-80 lbs, and have adapted to life on the keys. More uncommon is the Island Tree Snail, a terrestrial gastropod with pretty stripes on its turret. The snails once were abundant, but have declined precipitously from habitat destruction and tourists collecting shells. Large kettles of black vultures can be seen during the afternoon, circling higher and higher. In one such kettle, I spied a Bald Eagle trying to join in the fun. On a nearby powerline, I saw a small brown hawk that turned out to be a new addition to my lifelist, the Short-tailed Hawk, a tropical Buteo whose range in the USA is limited to southern Florida.

When we're all tired from a hard day's work, we can always "unwind" at the various evening sports. Monday night is for volleyball; there are many great players out here and it's lots of fun. Thursday night, we decided to try starting up a weekly kickball session. I hadn't played since the 5th grade. My first kick landed me on first base, full of too much adrenaline. Next, sprinting towards second, I began a slide to dodge the ball and ended up spraining my ankle! Ugh!! So my weekend plans for fun and adventure were postponed. 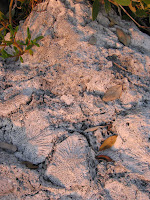 I spent my downtime wondering why the nearby banks to the Flower Gardens off the coast of Texas don't support the same healthy stands of corals. Could these banks (Bright, Sonnier, Geyer) be artificially enhanced to begin growing a healthy reef? Could corals be cultivated to become hardier to temperature changes?

Reefs are very desirable ecosystems because they are the most productive habitats and support a bewildering array of biodiveristy. Stony corals have the added benefit of being excellent carbon-sinks, by locking away CO2 dissolved in the seawater and creating calcium-carbonate, which becomes literally the backbone of the reef community. 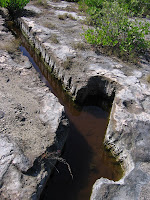 I also spent time this weekend walking some of the nature trails on the island, such as those around Blue Hole. Some of these trails cross the old mosquito ditches that were created to drain solution holes of water that allows mosquitoes to breed. There are over 100 miles of these ditches on Big Pine Key.

Tomorrow, work begins again. My ankle is still swollen and sore, but hopefully it'll be ready for action come morning!

Hey Tom, is that a seashell in the first pic in this entry? I'd love to see pics of sharks if you get a chance. keep up the posting, I am enjoying it.

That pic is the photo of an Island Tree Snail (www.nps.gov/archive/ever/eco/liguus.htm).

100 years ago, each island had its own unique population with different colors. But the population has crashed with the loss of trees and collecting.

The massive Queen Conch (en.wikipedia.org/wiki/Queen_conch) is the emblematic seashell of the Keys, but laws also protect it from collecting.

I might look into renting a camera on a dive sometime soon, since large nurse sharks seem to be common.