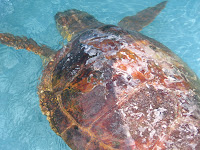 Sorry for the delay in updating, but my PC's mobo is fried. I'll keep this update short n' sweet.

Some lame news: Americans, especially, kids arent getting out in nature as much anymore, according to this study.

Some great news: Christmas Mountains will become a park... hopefully a national park!!!!

Meanwhile, we had a rainy work week, getting rained out on two afternoons. All of us passed the fire-training pack test, which was carrying 45lbs in a backpack 3 miles in under 45 minutes. It's a tougher workout than I expected! We spotted a few saplings of Chinese Tallow that are likely the first documented case of them infesting the keys. Tallow is a big problem on mainland coastal states. Some birds like the oil-rich seeds and can spread them to other pristine areas, where the trees can displace coastal praries.

My wife and I toured beaches and gardens from Key West down to Bahia Honda. We also visited the Sea Turtle Hospital down in Marathon. We saw Sandwich terns fishing in the surf and an Ovenbird hopping around the shrubs.

One thing I found interesting at the Turtle Hospital is that sea turtles do not breath involuntarily; each breath is a conscious effort. This means they must be intubated when they are operated on, so that they don't sufficate when asleep. They can easily hold their breath for 30 minutes, and with preparation to dive, can hyperventilate to saturate their blood for much longer stays underwater. As an emergency to prevent drowning, their brains can even undergo anaerobic respiration for a short period of time! I suppose most air-breathing sea animals have this issue of breathing not being a reflex action - I remember reading that dolphins sleep half of their brain at a time, so one eye is closed while the other half of the brain stays awake - weird!

My roommate loaned me a great book called Voyage of the Sea Turtle, so I hope to learn more about their natural history.

Time for bed, as I'm already half asleep!
Posted by Mangrove Tom at 10:35 PM