By the Dark of the Moon 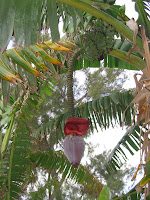 We had Monday off for President's Day! That made for a short work week, which was really nice. Unfortunately, that was also our last holiday until our job is over in mid April. Also, we need to attend an all-day first aid class this saturday on Stock Island, so this weekend is a bust.

It rained on us once again yesterday, but we persevered and nearly completed our sweeps through Stirrup Key, which is the sister tract to the Blue Heron refuge. One more transect, and a lot of lead-tree clearing, and we should be done with it. Lead tree is especially tedious to treat, as we must bag all the seed pods for each tree we cut down, and then spray the stump with double-strength Garlon (40%). To celebrate our victory, we spent the evening in Key West for the annual Walk on White Street, which is when the art galleries have an open-house with finger foods, and one gallery even had a string quartet playing.

Wednesday night, we stayed up late for the first Annual South-Florida Film Festival that was hosted at our house. We saw some local productions that I'm certain you've never heard about: 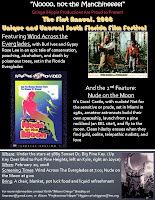 The first movie, "Wind Across the Everglades" had that canned Hollywood cast to the characters, but the plot could be considered way ahead of social issues, being filmed a decade before "Silent Spring" would be written, or for that fact, before most of the wildlife refuges in Florida had been created (Key Deer NWR was created the same year the film was released). It has some awesome quotable moments that are applicable to my new job, such as commenting on a dead man: "I'd say that boy had 'nough o' the glades."

The movie was fairly factual, however, including the deadly practice of tree-hugging the Manchineel, a tree the Spanish called "the little apple of death". It is so toxic that just the vapors from standing nearby can be deadly and scars from the sap may not heal, so it's a tree that likes to carve its initials in you. It is a member of the spurge Family, Euphorbia, and we often encounter its invasive relative, the Pencil Cactus Tree. Breaking off a branch or slicing the trunk of most spurges will cause white sap to squirt or ooze out, and this sap is toxic, and special care must be taken to never get it into your eyes. We have been trying to treat, unsuccessfully, a HUGE Pencil Tree with a trunk 3 feet 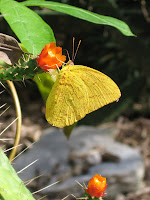 in diameter with a veritable forest of branches. (photo of a Large Orange Sulphur on an endangered Semaphore Cactus blossum.)

The second movie we saw that night I nominate for the worst movie ever: "Nude on the Moon". Now, don't get me wrong, I'd call a movie with nice music and pretty women a form of art... but this movie attempts to write a plot and then make models act. The result is so stunningly stupid and then more stupid that it warps the fabric of space-time.

Meanwhile, back to reality. Our own job has it's comedic moments.
Some plants we find have a really funny names, like:

But getting back to matters of the moon, we were bummed the night of the film festival because it was cloudy and we missed the lunar eclipse. As if to recompense, Nature put on an amazing 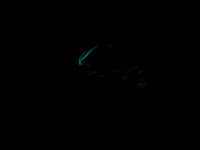 spectacle I was fortunate to witness: about 30 minutes after sunset yesterday, when the tide was high and the winds calm, the sheltered part of the bay began to glow. I counted about 50 individual, brightly lit, miniature whirling dervishes. Each were about an inch long and would swim furiously in tight circles for around 10 seconds, weaving a glowing web that would slowly fade back into the black water. It was the most amazing display I've seen of bioluminescent phenomenon. I went out again tonight, but only 9 worms were out dancing tonight. I tried taking a photo, but without proper equipment, it's kinda blurry. I think they are the art of Odontosyllis luminosa.

We finished up our RedCross First Aid & CPR training today too, so the weekend is going by fast. I'm ready for a day of rest, and daydreaming about nightly glowworms.

FYI: looks like Dr. Skip Snow's presentation on the potential habitat for burmese pythons has made national news - a friend of mine sent me this link:

Also, there is a book out regarding the growing gap between kids and nature: "Last Child in the Woods". I havnt read it yet, but seems to be well received.

The art festival sounds like a lot of fun. In re: the eclipse it was to cloudy at our house to see. Tom, are you staying in FL. until the job is over or are you coming back at all? I saved my last 3 issues of Backpacker magazine for you!