Time to Play - Name That Bird!

Ya'll are likely exhausted from your Invasive Weed Awareness Week fun, but I hope you still have some partying left in ya, because this year is also dedicated to... Year of the Frog! Amphibians are very sensitive to habitat changes and are being hit hard with wetland destruction, disease, and water pollution. Populations are drastically falling all around the world. So consider signing AARK's petition and getting involved in caring for your local water quality. 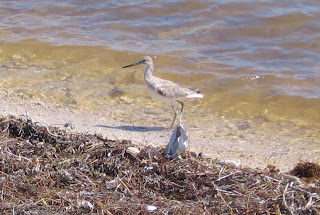 Meanwhile, I've been hard at work conducting research from my comfy beach towel. Can anyone help me identify the bird in the above photo? His legs were yellow and he liked to pump his tail as he scampered to n' fro. 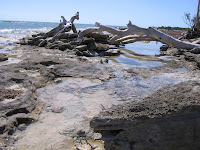 This beach was formed on the eroding side of the island, since it did not have a protective flank of mangroves to shield it from the powerful waves. At one time, large Buttonwood trees and a paved road went along the shore, but now the sea has eaten away at both trees and asphalt.

The rocky shore had tidal pools that were full of small Limpets, tons of shells from tiny Augers, 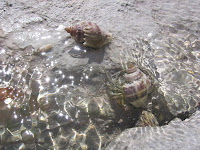 and larger Checker Nerites. On a small tidal marsh, i saw a congregation of Hermit Crabs that had taken up residence in colorful Whelk and Tulip shells. I never see such pretty shells on the beach, so I wonder where the hermits find them?

This work week we spent wrapping up transects on Stirrup Key, although we left behind a large amount of lead tree to be chainsawed, chipped, and bagged. We also revisited TNC's Torchwood Hammock Preserve on Little Torch Key. This preserve came very close to being a suburb, when a botanist visited a friend living nearby and noticed a potted cactus on her porch. Realizing it was the Semaphore Cactus, which was thought extinct, the botanist questioned where she found it, and then involved TNC. John Pescatello worked very hard to protect the preserve, and now the cactus is safe... except for encroaching invasive plants and the newly arrived Cactoblastis moth. The preserve is named after the most prevalent plant, the Torchwood Tree. Torchwood is notable for the oily resins, which make branches burn well as torches, as well as for making field workers crawl entire transects on hands and knees since it is such a dense shrub.

Another exciting event this week was the Pine Rockland Conference organized by TNC. My team 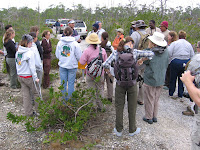 was invited to attend the local field trips to learn about ecological management issues for the Pine Rocklands. I was able to meet several interesting people, most in this photo. Chris Bergh, standing in the back with a visor, is leading the field trip on TNC's Terrestris Preserve. My boss's boss, Alison Higgins, is in the blue bandanna to his right. The lady dressed in all brown to Chris's left, is Paige Schmidt, an NWR biologist, who carries the fate of the endangered Keys Marsh Rabbit in her hands. Tall men to the far right background are Park Wardens and Foresters from the Bahamas, whom the Conservancy is donating a fire engine too, since fire is such an important tool in maintaining the pine habitats. The big guy with the Night Heron feather stuck in his cap is the botanist for the Turks & Caicos Parks, who had the best quote of the day... replying to an innocent plant-id inquiry with a condescending 'back off, man, I'm a scientist' glare, "I don't do common names." I need to start taking fashion tips from Fire Crews, they always have awesome pictures and slogans. 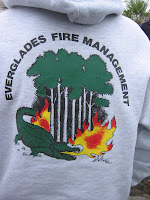 The Terrestris Preserve is jokingly referred to as the "most frequently burned habitat in Florida". Being privately held land, it's much easier to obtain permit for controlled burns, and the small 20 acre plot was bought by the Conservancy specifically to help the NWR learn exactly how the Pine Rocklands respond to burns. Burning the NWR land is hotly contested on Big Pine Key, since residents fear the flames. Fortunately, nearby military bases have been allowed to burn and show that it does greatly benefit herbivores such as the Marsh Rabbit. Other topics of discussion included rising sea levels, hurricane damage, and other disturbances that must require active management. 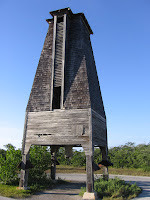 One other fun thing I did this week was touring a very quirky historical site, The Perky Bat Tower, which is amazing to me that its wooden structure has survived 80 years of hurricanes. I'll have to make a pilgrimage to one of the other surviving Hygiostatic Bat Roosts in Texas and try to promote modern ones being constructed near Dallas!