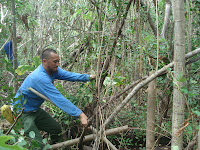 This week's title, "Playa Grande", translates to "The Great Beach" in spanish. I chose it because it's been a working metaphor for me lately; it's a powerfully emotional chapter in the book I'm reading (Voyage of the Sea Turtle), it's a beach in Costa Rica near my honeymoon, and by using a play on english words, I'm reminded of the grand play that Shakespeare equates with life. This photo is of my boss, Hau, working on Stirrup Key, where shortly afterwards we stumbled across the large bee-tree pictured below. 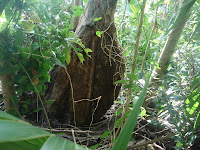 We spent several days in Tavernier Key, sweeping through state-managed land. Here we found large stands of Tamarind Trees, which have a dense wood and requires a chainsaw to girdle. The trunks are very straight, so in some ways it is a shame to treat them, but they were slowly spreading through the hammock and shading the understory with their broad canopy.

We also performed more chainsaw and chipping work on Big Pine Key, as a warm-up for this coming week when we host volunteers from Americorps and then Alternative Spring Breakers. This year is a record for how much volunteer help we have, so we want to make the best use of the people-power and take out some heavily infested stands of peppers. It's really excellent there's so much enthusiasm in students that choose to spend their precious free time on environmental projects! 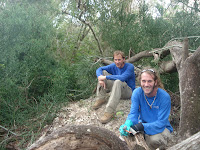 Meanwhile, Topher's knee began giving him trouble this week. (Topher is the guy in the foreground, laughing with me at being totally surrounded by a toxic PencilTtree. Hopefully, it's nothing serious - the doctor just told him to take it easy to see if it'll heal up on it's own. We've been doing lots of crawling and stooping on the job, and all of us have had our shares of aches, cramps, cuts, bruises, and itches. It looks like I'm not immune to Poisonwood, after all, since after swamping up chainsaw debris, I began to have several small rashes appear.

Last week, I reported on how amphibians the world over are having trouble. Well, here's a

happy tree frog that is doing quite well here in Florida - unfortunately at the expense of other native frogs he likes to eat. He's the Cuban Tree Frog, an is considered an alien invasive. I wonder if herons can be trained like falcons to hunt them down? They were likely introduced by escaping from irresponsible pet owners/traders, so please remember; Don't Let it Loose!
Posted by Mangrove Tom at 12:26 PM