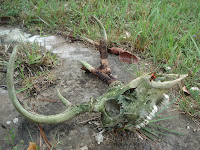 Q: what is a pirate's favorite herbicide?


Ok, maybe i haven't found anybody to laugh at that joke yet, but give it time. This past week was spent working alongside Americorps and Alternative Spring Breakers, and we put em to hard work. The first day was mostly a 1-day bootcamp, where we taught them to identify the top 5 most-wanted plants (Mahoe, Pepper, Australian Pine, Colubrina, and Lead Tree) and then how we treat them. That afternoon, we worked together to clear the fireline around a house in the pine rocklands; removing fuel material such as dead palm fronds and deadwood. 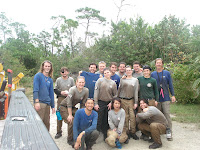 The Americorps crew were hard workers; our first day it rained constantly, but we still had 4 chainsaws going all day long, slicing up peppers and then dragging them over to a giant chipper. The next day, we continued the chainsaw blitzkrieg, but instead of rain, it was hot and sunny. We were soon as soaked as if it were pouring rain, and a few folks hit the first stage of heat exhaustion. It was a tough two days, but we finished the job (and thereby rewarded with ice cream). Yeah - the perks in this job are just sublime. 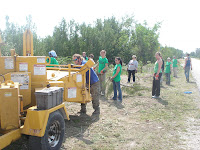 We finished the next two days working on chainsawing + chipping Australian Pine. The spring breakers were very impressed with the powerful diesel chipper, and even named the beast. They invited us over to their camp for a really nice dinner of grilled food, volleyball, and a campfire. We wore out the chipper, the chainsaws, and ourselves. We worked nearly 50 hours that week of intense, hard labor, so it really is nice to have it behind us. You'd think that after such a hard week, we'd take the chance to rest up, but not so. We had a great time exploring Key West and kayaking over the weekend. I was able to get some nice photos Sunday kayaking near Picnic Key of some Magnificent Frigate Birds.

See ya next week!
Posted by Mangrove Tom at 9:19 PM

Chainsaws and Rain would be an excellent world music band name.