I See a Manatee!

Serendipity comes in many forms. Originally, we had been 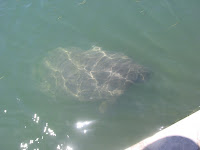 prepared to go on a snorkel trip with the marine team last Thursday to monitor Staghorn coral "plantings" off Key Largo, but high winds can stir up the sediments, reducing the visibility such that the trip was canceled. I was dissappointed. Not to be deterred by Nature, we tried again on Friday with a fun cruise on the Bahia Honda Park's boat. Right before boarding the boat, we saw this huge manatee poking her head up in the canal. This was my first time to see one, and I was excited. At first, it was a game of hide and seek, since mats of seagrass and the boat were hiding her. Then she came out in the open, and we gave her a drink of fresh water, which she greatly appreciated. It's always a great day when you can check off an endangered species of charismatic megafauna from your lifelist! 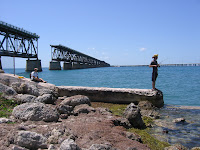 After that, luck changed once again. The boat was late leaving the dock because they replaced one of the propellers, but shortly after passing under the old bridge, the prop flew off. The boat took us back ashore, so I just went to the edge of the beach, put on my gear and swam out till I was content. Nearshore, there are little meadows of seagrass beds. On the edges are lots of juvenile fish trying to take shelter along them. About 200 yards offshore, the seagrass turns into an expansive gorgonian flat that makes the swim worth it. Lots of octocorals, with many common reef fish swimming about, such as a scrawled cowfish and a large balloonfish. Also notable were many Rock-boring urchins hiding in the nooks n' crannies.

Hungry from a long afternoon, we had a tasty beer and sandwich at Rob's, and then returned to 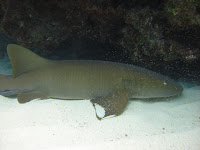 the house to visit with some friends who just returned from a fishing trip. We shared stories, caught some more fish, and then Topher and I stayed up late into the wee hours, going back to Rob's for some Red-headed drinks, and then back home for fishing in the canal... just not ready to let the fun end.

Ugh... I was desperate to get on a boat ride to a reef, so I struggled out of bed and Toto and I went off to Looe Key for a dive/snorkel trip. The water was cold, but helped keep me alert! Some reef 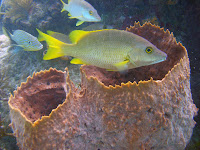 sharks were there, and the biggest highlights were another Hawksbill Turtle let me swim along side him for a spell, and I saw a large school of midnight-blue parrotfish, which are an uncommon fish to see, and even more uncommon to see 17 in a school around the large coral heads. That evening was a trip to Key West for some evening entertainment. No rest for the weary!!!

This past week, we hooked up with the hardworking Americorps team again for another tough week of chainsaws & chippers. Volleyball monday night was really hard, since I was sleepy, tired, achy, and hungry. Tuesday night, we hit up Boondocks, a local tiki bar, for their qualifying rounds of karaoke. I got things started with an amazing rendition of "Times Like These", my first ever public singing performance. I think their mic was broke, since it didnt sound right. ;-p 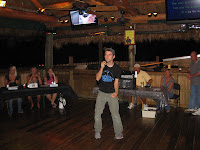 Toto really lit up the floor with some amazing Billy Jean moves, and Lucky Charms sang some beautiful songs. Our group cheered them on from the tables, and then things got even more fun with group singing of Bohemian Rhapsody, Love Me Do, and Summer Nights. We returned the next night for the finals. Steve qualified as a wildcard entry, and all three of them ended up sweeping the prizes! Lucky won a trip to Jamaica, Steve a $50 coupon, and Toto a salon treatment. Very fun! Unfortunately, Topher became ill from a round of heat-exhaustion, so he's been recovering slowly.

Thurs night, we stayed up late to watch a film I wanted to see, "Into the Wild", which was very good. I was soooooo tired, but couldn't sleep after watching the movie that I went to nearby Spooky House (an unoccupied house that has an excellent view of the bay) and watched the stars, storms, and a shooting star as I let my thoughts ratchet down. 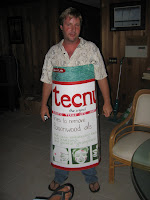 Last night was our going away celebration. The theme was to dress as an invasive species, so I was Coco Nuts. Also present was a bottle of Technu, the Humpback of Notre Dame, a couple of Tourons, a zebra-muscle, and a very invasive W. Bush... among other costumes. We floated a keg, jumped in the canal, and partied till 4am. There was awesome guitar playing by Randy, Bob, and Toto, and fun singing. Most of us jumped in the canal, one of my favorite passtimes here. We also saw a film-show of Lauren and Alison's Bahamian boarding attempt on a sunken vessel. My Strike Force was presented with certificates and a personalized photo montage, which was a really nice thought. The certificate reads: "The above named has 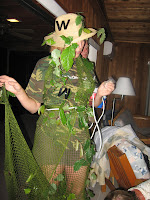 
So now it's another weekend... just one more weekend after this and I'm gone... there's no time for sleep! Party on, d00des!