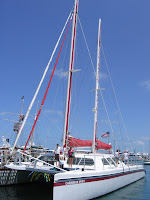 The Nature Conservancy receives grant money to treat both public and private lands, and some owners of private lands are very appreciative of our work. We've met a few hospitable owners who have treated us to frosty sodas, but what was really amazing was when the owner of Sundance cruise invited the Strike Force and two Americorps crew aboard their huge catamaran for an exciting sail out from Key West to Sand Key. The wind was really blowing, and we reached 14 knots! Move, zig! There was some 2-4' swells, so a few folks began turning green while snorkeling at the reef. Visibility was also reduced, and the shallow reef did not have much living coral. There were large schools of yellowtail snapper, and lots of parrotfish.

This week began our basic wildland fire training. It is a week long course for the S-130/S-190 certification, which is called a "red card". A lot of the course is reviewing real scenarios that 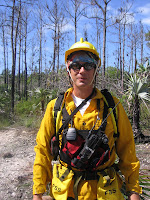 ended in tragedy and understanding how to avoid them. What I found interesting are two misconceptions I had about dangerous fire situations: huge burns are safer because the fire behavior is more predicable, and more wildland fire fighter fatalities occur from falling trees and aircraft crashes than from the fire directly.

The folks being trained were from the Key Deer National Wildlife refuge, local fire department, and the Nature Conservancy. Wildfires on the keys are very rare, so the training is more to build up a strong force to assist with the upcoming prescribed burns that the refuge biologists will conduct to restore habitat for the Lower Keys Marsh Rabbit... what they like to call "rabbitat". 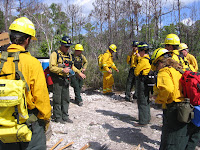 After studying up on concepts, we prepared our tools and Fire Line Packs for a field day of practice, which was conducted at a real wildfire burn area on Big Pine Key called Thunderstruck 2. I was selected to be Squad Boss , which meant lugging around this radio harness in addition to the line pack and tool. We established a control line around a simulated burn, and even had our lunch of MRE's rudely interrupted by a radio call to chase after spotfires that had crossed our perimeter. Then we had to make way for a simulated tanker drop, and then roll out hose to mop up the burned areas.

Also during the week, my friends threw me a nice birthday party; excellent food and wonderful companionship made for a very fun and memorable evening. I can't believe my time here is running out! Just one more week and then I'm gone, so there's much to do until then. Tomorrow, I'm meeting my folks in marathon for a fun day of scuba diving. 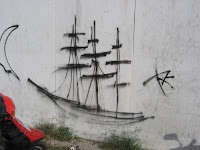