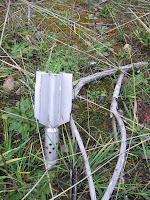 It's been a great season working with the Washington chapter of The Nature Conservancy. My time here has run out and we're on our way back home for the holidays. This week went out with a buzz, fortunately not a bang!

It was the one week per year the TNC is allowed to work on the Artillery Impact Areas of Fort Lewis. We had been through Unexploded Ordinance Training, which can be summed up with; "don't touch anything metal". We did see lots of weird things out there, and fortunately had a trio of soldiers to sweep the area first and flag anything they thought looked dangerous. Lots of mortars, shells, armor piercing rounds, flares, RPGs, and other strange stuff were out there, including tanks, trucks, and dumpsters used for targets. 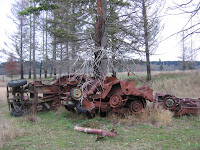 frequent (albeit unintentional) burns that wipe out any plants not adapted to such a frequent fire regime. Also unexpectedly, we spent our time chainsawing native fir trees -- whose crime was encroachment on the prairies. Most of the trees were "grandfathered" into the prairie before the impact area was established, and had grown beyond the reach of fast burning grass fires. It was certainly a juxtaposition of place, equipment, and activity that I normally wouldn't associate with ecological restoration!

Now, it's time to pack up the old truck for a long ride back home to Tejas!
Posted by Mangrove Tom at 5:51 PM

right on! You'll have to give me the scoop. See ya tomorrow!