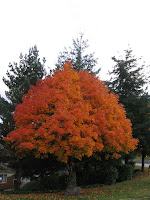 My time here as a South Sounder is drawing to a close. Our departure date is a mere three weeks away and we're already paring things down in the apartment. At my job in the Olympia Nature Conservancy, things are drawing to a close as well. Brian, my coworker I've been working with all summer, has left for vacation back to Illinois and Iowa. We spent a few last sunny days spraying Aquamaster on some renegade patches of Reed Canary Grass, and then went after Yellow Flag Iris. Treating Iris is a slower process, since it involves a cut-n-dab method to ensure the huge tuber-roots soak up the herbicide.

I spent the last sunny day spraying Garlon on Hairy Cat's Ears on Johnson Prairie; which was in preparation for Cheryl to replant these plots with native forbs that are valuable to some rare & threatened butterflies, such as Taylor's Checkerspot and the Mardon Skipper. Fort Lewis has become these butterfly's last stand, so we're trying hard to determine ways to restore prairies that allows them to flourish again. Some restoration treatments, such as prescribed burning, ultimately benefit the butterflies, but if the timing is wrong, such as when caterpillars are foraging, the short term could result in wiping out an entire population. While spraying, I came across a clump of pretty feathers of a Ring-necked Pheasant in the grass, perhaps the scene where a hawk had cleaned a kill. It reminded me of a book I'm reading, "Hope is the Thing With Feathers", which is a mournful memoir for 6 extinct birds that once were significant components of North American wildlife. It's a book suited for this time of year; sad ghosts of the past reminding us of what has been lost, which is a form of bitter inspiration for conserving these remnant prairies. 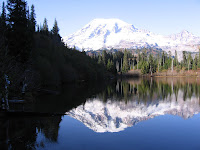 My friends from Redmond came down last weekend for a visit, and we spent perhaps the last warm, sunny day hiking up to Snow Lake on the Tatoosh Range in Mount Rainier National Park. The shadowed portions of the trail still had snowfall from the past week, and footprints of elk could be seen alongside the meadows. Unicorn Peak and the Castle had a light dusting of snow, making the grey rocks look even colder. Bench Lake dutifully reflected the grandeur of Mount Rainier, but Snow Lake itself had a thin veneer of ice over it's surface, already in the clutches of winter, a frigid portent that yet another year is drawing to a close. 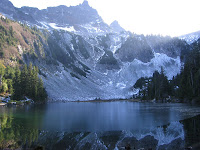 We will likely not visit Mount Rainier again this year, but we have drunk from the artesian spring in downtown Olympia, whose waters originate on Nisqually Glacier on the slopes of Mt. Rainier. Local Legend has it that this will always bring you back to Olympia.

Beginning on Halloween Eve, the weather has shifted into classic northwest winter: raining every day. Our work schedule must shift too, so we're readying the tractors to mow Scotch Broom. I hope my rain gear is up to the task!
Posted by Mangrove Tom at 11:48 AM