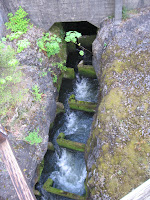 The salmon are returning back to Tumwater Falls! Many rivers and streams along the Pacific Northwest have historically suffered much damage to salmon; mostly from water quality issues due to overly intensive logging or dams created for various reasons. However, the Deschutes River in Washington enters the brackish waters of Puget Sound with an imposing waterfall. In 1952, engineers built the salmon a fish ladder to climb past the waterfall. Now, the Chinook Salmon are coming back to spawn, slowly working their way up the rushing river to spawn. Over 10,000 are expected this year!

We also went to visit Nisqually Wildlife Refuge, which is currently involved with a huge earthworks program to allow floodwaters to restore wetland habitat on the delta that was lost to agriculture. Along the river we saw a family of three sea lions swimming up stream! We couldn't walk too far though, since most of the trails were blocked off because of hunting on nearby state land. 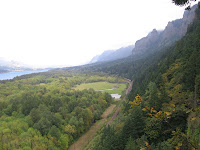 While the western Washington weather is getting gloomier by the week, the autumn is still providing nice days. This weekend we explored more of the Columbia River Gorge. This majestic canyon was created about 15 million years ago in the Miocene era, when massive basalt flows poured in from the east. Then, during the past ice age, the massive Missoula Floods carved out the land and essentially created the landscape seen today.

The area has more impressive waterfalls than any other region I've been too, and being so easily accessed from the interstate, many of them, such as 620' high 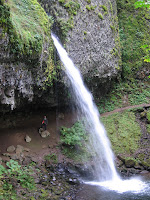 Multnomah Falls are popular attractions. We started our hike by returning to the first place we ever saw in the Cascades: Horsetail Falls. We met a couple coming down from a hike to Rock of Ages, but they had encountered too much snow, in May, at only around 900ft above sea level! Since it sounded interesting, we returned to do the hike.

We hiked up the slope to see Ponytail Falls, which is one of my favorites. It has a cave set into the basalt cliff behind the falls, so you hike behind them. From there, the trail leads up to a bluff overlooking the Gorge and then goes down to Middle Oneonta Falls. Making our way upstream, we encountered the beautiful Triple Falls. Retracing our way back to Ponytail, there is an unmaintained trail leading straight up the ridge. This eventually led me to a huge cliff of lava turned golden in the setting rays of the sun. Along the 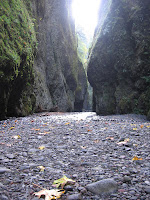 ridge is an outcrop of basalt that has eroded into a perfect arch, just big enough to stand in and gaze out eastward. It was a tough hike up, but worth it for the exhilaration of being there to watch the shadows stretch across the valley below, eventually reaching across the river to Beacon Rock where we were camped just a month before.

The next day we started out at Oneonta Gorge, which is an unexpected slot canyon. Unfortunately, it begins with a huge log jam slippery with slimy mold that required climbing past. Beyond was a very narrow and high canyon walls covered with mosses and ferns. If it were 10 degrees warmer, I'd think I was in Hawaii instead of the Cascades! We hiked up past Multnomah Falls, where there is an overlook to watch the falls spill down. And then the trail follows the crashing, noisy stream past a few more shorter falls and 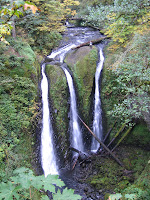 cascades when Wiesendanger Falls sneaks up on you from around a bend.

Down the road, we made a few more stops for short hikes. We saw the ruins of 92 year old Mist Falls lodge, which is now nothing more than a collection of broken stone walls, pottery, and a robust black stone chimney standing alone in the woods. We saw Wahkeenah Falls, and Bridal Veil Falls, and just when I thought we'd seen them all, the last one was one of the best: Latourell Falls. It's only a mere 250' high, but it has it's own upside-down ampitheatre that reminds Lisa of a madman's pipeorgan petrified in stone. After that last fun hike, it was time to drive home and hit the hot tub for a long soak.

I feel so sorry for you... being forced to look at all those awful waterfalls..and those tall things...what are they called... ummmm trees, that's it... trees.
and all that other scenery....
what you need is some nice dust!!