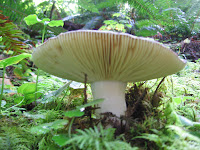 The weather is starting to change over to cooler and wetter conditions here at the Puget Sound and coastal prairies. The few sunny days left are going to be action packed, as we race to treat areas of Reed Canary Grass that we had previously brush-cut along stream beds. Reed Canary Grass forms such a tangled mass in creek bottoms that it prevents salmon and other fishes from 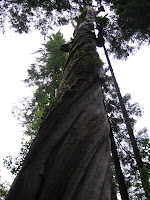 being able to swim upstream to spawn, and can even grow to such densities as to lower the water table. It's also very difficult to kill, requiring us to wait about 1 month after cutting to return and spray it with an aquatic-approved herbicide. Fortunately, weeds we've sprayed earlier in the summer look like they are not resprouting, so we seem to be making a difference.

Our prescription fire program is also trying to finish up a few last burns before it becomes too damp to continue, so early next week will be a rush to complete a few last important areas. 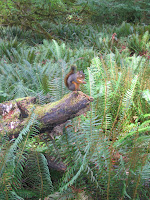 For our weekend adventure, Lisa and I went exploring the Hoh River and Rainforest on the west side of the Olympic Mountains. We saw huge, old growth Western Red Cedars, Hemlocks, and Sitka Spruce, and an area in the forest called The Hall of Mosses. Our campsite for the first evening was simply along the river banks in an area manged by the Hoh River Trust. We had the entire river to ourselves, and made a little fire along the gravel bar as Kingfishers would fly past and chatter. During the night, we heard sounds of a large animal rummaging around, but fortunately we are careful with locking away food at night. In the morning, near our campsite, we found fresh bear scat. 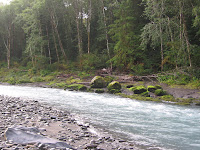 winter, and the nearby Himalayan Black Berry bushes (alas, an exotic invasive weed, but a tasty one!) were providing the bears most of their diet. A full bear is a happy bear, and we were glad to have not let this one sample human camp food and begin associating people with food; bears are very smart, and when they learn that campsites have food, they will keep returning and eventually cause a problem. Unfortunately, the bears get blamed for eating any food lazy campers leave out, and eventually are killed.

The following day, we hiked up the river to where Mount Tom creek flows into the river, and a pretty waterfall cascades down. We saw bald eagles, baby coho salmon, red squirrels, and lots of signs of elk. When we returned to our camp in the National Park, a pair of bull elks began sparring with each other! 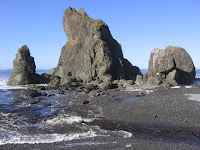 On Sunday, we visited several of the coastal beaches and watched the tide roll out. These beaches are much rockier than what I'm used to seeing, and even stranger, have huge masses of driftwood logs piled along the shore. Looking out west into the Pacific Ocean, I was reminded by Lisa about an article in my American Bird Conservancy magazine about death by plastic. Plastic is a wonderful material; extremely durable & lightweight, and cheap to make; but sadly it's inexpensiveness has let society treat it as disposable.

I recall one of my old school friends dad, Dr. Foss, predicting in the early 1980's that since plastic is so durable that it will quickly accumulate if we are not careful how we use it. Sure enough, plastics have accumulated so much that out in the middle of the Pacific floats an island out of trash as big as the state of Texas! Prior to 1990, this 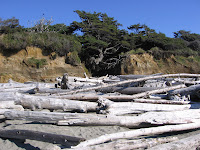 area was known as the North Pacific Gyre; a slowly rotating current similar to the Gulf Stream in the Atlantic. Now, it is called the Pacific Garbage Patch. The patch amazing only represents about 10% of the total plastic trash in the north Pacific. Seattle had recently passed a law requiring a 20 cent fee charged for disposable bag use to encourage us to reuse bags instead of trashing them. Unfortunately, this plan has stalled. Hopefully, more cities and states will adopt measures to reduce the amount of garbage, especially plastics, which ultimately save much more in the long run; not only in reducing waste, but preserving natural systems like the pacific ocean that provide us food.
Posted by Mangrove Tom at 3:23 PM