Nothing Gold Can Stay

The difference one week can make is amazing. One week ago, we performed what might be our last burn of the season at Glacial Heritage Preserve. It was about 20 acres in size, but with 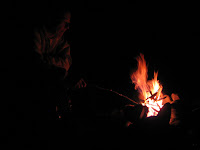 heavier fuel types, such as logs, snags, and stumps that kept burning long after the grass fire was out. The perimeter of the fire break had a few weak spots too, due to unburned heavy fuels. We wanted to ensure the break stayed secure and patrolled the area frequently, so Lisa, Brian and I camped out overnight. The winds would change several times during the night, and each time the wind shifted, many new fires would flare up inside the burn unit. We still had 2 pumper trucks on site, so we were certainly able to tackle any problems that might get started. When the shifting winds would settle down, smoke would pool around the area like the fog of war. 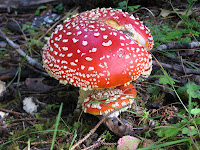 In the morning, there were still many areas of open flame, but it began raining. We traded our watch for someone to monitor the area, but the rains kept falling for the next 4 days, letting us sleep tight knowing the fire was well doused. Unfortunately, the rains also put a damper in our plans for camping over the weekend. We opted instead for a brisk walk through Tumwater Hill. Lots of the big leaf maples were turning colors, so we collected a few leaves to decorate around our pumpkin, and our walk reminded me of the famous Frost Poem:

Nature's first green is gold,
Her hardest hue to hold.
Her early leaf's a flower;
But only so an hour.
Then leaf subsides to leaf.
So Eden sank to grief,
So dawn goes down to day.
Nothing gold can stay.
That seemed to be foreshadowing for Wall Street as well. It might seem surprising, but many of the equations used to model both ecological systems and economics are very similar. Concepts such as feedback loops, competitive exclusion, laws of diminishing returns, and others can be applied equally to both disciplines. However, one thing Wall Street does that is not paralleled in nature is having a mass-herd mentality result in jumping off a cliff. The wives-tale of lemmings leaping to their deaths is actually a manufactured myth perpetuated by a Disney film in which the directors forced lemmings to jump to their deaths (and subsequently won an award for best documentary!). Other species can also be forced to jump to their deaths, such as bison being tricked into galloping over cliffs by Plains Indians, but one would think that human investors would not be as foolish (our species name 'sapiens' implies we are wise). Taking a manageable credit crunch and turning it into a negative feedback loop, thereby virtually ensuring a recession, reminds me of an old saying, "argue for your limitations, and sure enough, they're yours".

But don't worry, my fellow earthlings; I have been in jobs where I worry about my entire division being eliminated, or teaching foreigners how to perform my job because they are willing to work cheaper, or automating a process to make it more efficient and require less manpower... but I bet very few of you have had your job threatened by a work force of Goats!!

Yes, you heard (herd?) me correctly, certain aspects of my job can be performed by goats, willing to work for the pure joy of killing weeds. The idea of using livestock as a tool for 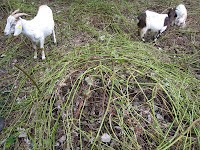 controlling weeds is not new, and goats are almost like mercenaries in the sense you must control what they are doing at all times, or they might become your worst nightmare. Like many weapons, they are capable of doing much damage to an ecosystem if not carefully deployed, but if used with precision, can be effective and mutually beneficial. In Washington, goats are employed by the Nature Conservancy to tackle dense stands of blackberry thickets. I have also wondered about using them to tackle the marshes on Fort Lewis that have become mono cultures of Reed Canary Grass.

Well, the Winds of Change are nothing new to me, and can be interesting times; like the many unique species of birds now migrating south on these northern fronts. It's a great time to view many birds, such as the majestic sandhill cranes, so I plan to get out and make the most of it. I'm going to miss BirdNote when I leave the Puget Sound, so I'll have to lobby my own Audubon Chapter to make a Southwest version of the show.
Posted by Mangrove Tom at 1:15 PM