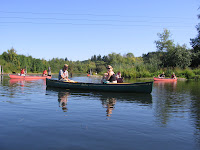 This week was off to a great start, as we had our quarterly meeting along the Black River. This river has it's origin in deep, dark springs of Black Lake, just a few miles from my apartment in Tumwater. The lake is strange in that it has two outflows from it; a canal that stretches north to Puget Sound, and the Black River that stretches south and eventually joins forces with the Chehalis river that heads out west to the Pacific, technically making the Olympic Peninsula the largest island in the United States. We spent the day on the river, which the Nature Conservancy has helped protect and restore, and as thanks, Black River Canoe and Kayaking Trips very generously loaned us canoes and shuttled us back from our drop off point! We saw lots of belted kingfishers, cedar waxwings, and blue herons. There were also these huge globs stuck to the base of some of the water lilies that are probably the egg cases for a newt. 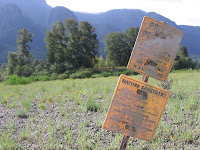 Then it was back to business as usual, which some spraying of nefarious Scotch Broom and then two more burns. One burn was at Scatter Creek, which is a diverse wet-prairie located at the base of the Black Hills. We burned several small test plots there, along with two other units a few acres in size to determine how the prairie there responds to fire. I think these were the first prescription burns done in that area, so it was great to accomplish them. The next area we tried to burn on Friday was a 5 acre unit on Rocky Prairie. We began setting blacklines, but the wind kept shifting back and forth, and eventually decide to drift smoke over a nearby busy road. To prevent the smoke from affecting visibility, we tried to go slowly, but it became clear it just wasn't going to be a good idea. That 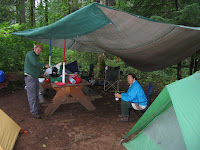 was probably a good decision, since a sheriff was nearby attending a historical reenactment at a nearby pioneer settlement site. The DNR Burn Boss said, "I've called off fires because of bad weather, broken equipment, medical emergencies... but this is the first time I've had to shut down a burn because of a bleepin' stagecoach." Always nice to be a part of history.

Lisa and I didn't get much of a weekend, because on Sunday morning, we joined up with Casey and Brian to drive down to Pierce Island on the Columbia River gorge. We setup camp in the rain at Beacon Rock State 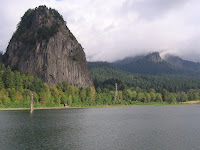 Park, and then canoed each day over to the island, armed with brush cutters and back pack sprayers to treat the False Indigo that is starting to form a dense stand along the eastern shores of the island. It was a spectacular setting to work in, with the massive 900' tall Beacon Rock jutting up from the shoreline, the rocky cliffs of the Columbia Gorge framing the valley of the river, and even the huge Elowah waterfall on the distant Oregon cliffs could be seen. 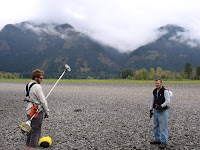 years ago, and noticed the river level changed with the tides, the first sign their journey to the Pacific was almost over. Less than 100 years ago, the Army Corps of Engineers saw this rock as nothing more than rubble; they planned to blow it to bits and use it to make a large jetty (fortunately, Mr. Biddle begged the state to stop the nonsense). Thankfully, this small area was protected, and we saw herds of elk grazing on the island, a peregrine falcon feasting on a gull carcass, an osprey with her nest, and a new lifelist bird: a pair of horned larks! We didn't have much time to explore the park, but we did manage to do the short hike to Little Beacon near our campground, which was very rewarding: we saw rare lowland Pika in the rock slides along the trail! Casey had also noticed some wood fragments that glow in the dark, which I found really interesting. I suspect it's from a mold, so I brought them back to the apartment to try and figure it out.

Of all the times I've worked through the weekend, this was the best!
Posted by Mangrove Tom at 12:40 PM

I think the glowing wood is an alien creature...

I posted a bunch of photos from Beavers Bend on my Flickr...
www.flickr.com/photos/oddthingies