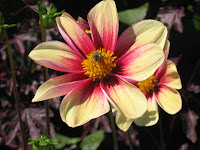 It was an eventful week, as we burned some test plots at West Rocky Prairie and Mima Mounds, and also a large 80 acre unit on Glacial Heritage Prairie. The Glacial burn included a small sections of fir woodlands, which subsequently took two days of work to douse all the smoldering spots. Photographers from National Geographic had attended that burn to tell the story of how the Nature Conservancy is using prescription fires to restore native plant populations. That was a good fire to take pictures, since it had some large flames and big columns of smoke.

For the weekend, Lisa and I camped out at Olympic National Park's Heart of the Hills campground. We did spend a little time there attending a ranger talk and exploring a small stream, but really we just wanted a nice place to sleep near the ferry docks in Port Angeles. We woke up at dawn on Saturday to drive down to the docks and catch the first ferry to Victoria in British Columbia. Victoria is a nice city on Vancouver Island, and we had arrangements with the Prince of Whales to take us out on a boat ride to find some Orcas. 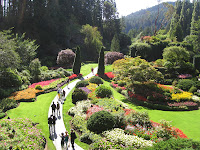 Upon landing, we had several hours before our boat ride, so we rushed to see The Buchart Gardens. 100 years ago, it was a cement quarry, but when the limestone deposit was exhausted, the Burcharts turned it into a magnificent sunken garden. Even at the beginning of autumn, the gardens had lots of blooms to enjoy. We rushed back to the docks to catch our boat for the three hour tour. It was hot standing around in the docks in our jumpsuits, but once the zodiac got up to speed on the open water, we were wishing we had brought gloves too!

The captain had heard a sea plane sight the J-pod family of Orcas, but they were heading east 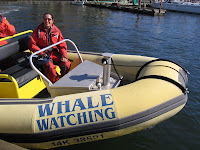 and nearly 2 hours away. The captain instead opted to head out west, where some transient killer whales had been seen, along with reports of a Humpback Whale too! We circled a tiny island with a lighthouse that is now an important rest area for Harbor Seals and Sea Lions. It was great to be so close to hear them, but not so great to smell them. Ugh! The pinnepeds were so used to seeing boats, that we hardly got their attention. Instead, they fear the killer whales who hunt them. One thing I did not realize is that the resident Orcas feed primarily on fish such as salmon, but the families of Orcas that travel long distances on the west coast are hunters of seals, Dall porpoise, and sea lions, which earns them the title 'killer whales'. 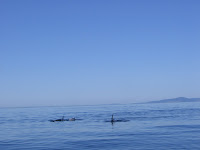 We continued our search for Orcas, but the only cetaceans we saw the entire trip were Dall porpoise, who were not interested in playing around in the pressure waves of our boat, as most dolphins and porpoise seem to enjoy doing. I wonder if the Dall porpoise have learned that tour boats are heading towards Orcas and following us would lead them into danger? Riding out, we stayed near the coastline where the Orcas would likely be hunting, but on the return back to Victoria, we rode the open & deep waters of the Juan de Fuca Straight, where the Humpbacks would swim.

So we returned to shore without seeing any Orca, but the good news is that Prince of Whales has 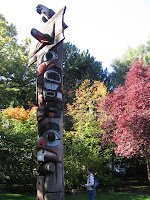 a guarantee that you can continue riding with them until you finally see your whale. We made our plans to ride out with them again on Sunday. This time, we headed east toward the San Juan islands, where our captain found us a pod of transient whales, which she believed to be the T-30 family. Thar be whales! The two males would stay a distance away from the family, and the matriarchs and one calf would form the core of the pod. They would breath at the surface about 5 times and then make a long, deep dive for several minutes, leaving us guessing where they'd surface next. Our captain had radioed in the discovery to other tour operators, and after about 30 minutes of observing, we left the area to make way for the next boat coming on scene.

It was a great experience, and I'm glad we had the perfect weather for it!
Posted by Mangrove Tom at 11:45 AM