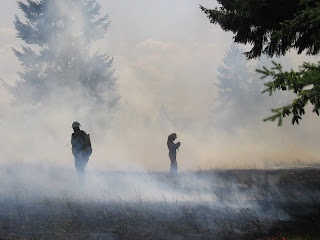 The burn season continues, with more prairies getting torched. We've noticed that without enough fuel load, problem species like Scotch Broom or exotics like St. Johns Wort seem to survive the burn. I've also discovered how much hard work goes into mopping up after the fires! Ugh. Mosses, rotten roots, and fir needles will continue smoldering underneath the surface unless they are dug up and doused. We try not to disturb the soils, since that gives an opening for weeds to encroach, but more important is ensuring the fire doesn't escape it's boundaries. Fortunately, I was able to leave work early enough one evening to attend Tea & Tales at the Tumwater library... whew!

For the weekend adventure, we climbed Mount Saint Helens. Since Rainier and St. Helens are 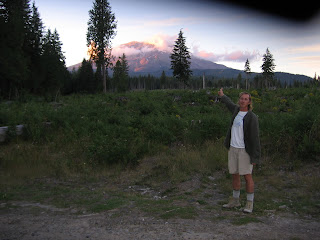 such big draws for hikers, there is a permit system in place to ensure the number of people on a given day does not exceed a certain limit. Otherwise, too many people cause severe trail damage and it would be impossible to determine who is on the mountain if an emergency occurs. Only 100 people per day are allowed to climb Mount St. Helens, and the weekend reservations for summer book up months in advance. We bought our permit for last Friday, but had to reserve it in June!

We picked up our permits Thursday evening before and established our base camp at Climber's Bivouac, which gave an expedition-style feel to our climb. Before bedtime, we prepared our gear for the ascent. The following morning we awoke to a cold sunrise and began our trek up the Monitor Ridge Route at 6:30am. There were still some snow banks sheltered in the forest by the trailhead at 3800 ft and in the deeper gullies on the flanks of the volcano. 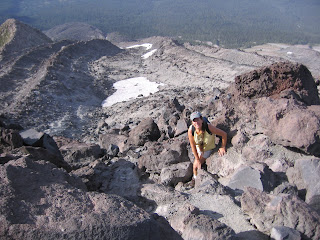 We cached our heavy jackets and some water at treeline (around 4700 ft) and began the scramble up the boulders. The weather was perfect, which gave us views of Mount Adams, Mount Hood, the Three Sisters, and in the far distance, Mount Shasta in California! On the climb up, we passed by two monitoring sites: one was an abandoned platform, but the other site was an active EarthScope Plate Boundary Observation Station. Its job is to continually receive GPS satellite signals and plot its location, then transmit this data to help monitor shifting continental plates.

After the boulder field came the pumice field (starting around 7800 ft) and the final push for the top. Ever walked through sand? Now imagine 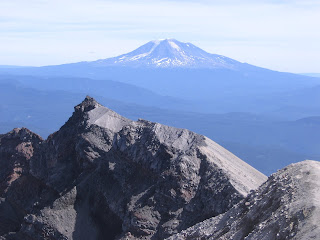 doing it uphill and you have an idea of what walking through pumice is like. We continued marching upwards and onwards, until finally we were at the rim, where we celebrated with an early lunch.

It was tremendous staring at the inside of a mountain that ripped itself apart. Spirit Lake was still, some twenty years after the eruption, 30% covered in floating logs. Several steam vents hinted at the possibility the dome was alive and waiting for the next mountain-building cycle. Rock slides tumbled down the crater walls. We also thought we heard gurgling noises below the dirty glacier. Mount Rainier beckoned in the distance to the north. 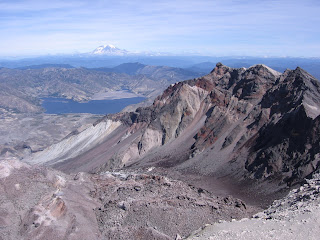 although the wind and almost continuous rockslides are probably shrinking those numbers down. Looking over the edge of the rim was very windy, and large dust devils almost continually scoured depressions around the rim. This flying ash and dust is why goggles are recommended gear for climbing to Monitor Ridge. We could see Johnson Ridge Observatory in the far northeast, and in between the desolate Plains of Abraham stretched below, still mostly barren after 20 years. If you look closely at the flat, broken rocks (remains of the whaleback dome shattered during the 2005 eruption), you can see an orange dot that is a geologist far below, investigating the dome. He must've been transported there by helicopter.

We headed down at noon, but it took a long time to pick our way across the boulder fields. We took the chance to glissade down one of the snow banks, which was a nice change of pace.

It was a great and unique experience to climb this wicked landscape and see an active volcano! Next weekend, we hope to see a real whaleback on a boat trip to another country!