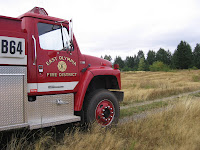 The Nature Conservancy has a slogan of 'saving the last great places', named for an intensive initiative of identifying and securing many of our intact ecosystems. The prairies and woodlands that are now protected from agricultural and development often have a long term relationship with wildfire that acts as a recurring disturbance that keeps the ecosystem from slowly changing into a different form. This need for fire to maintain an ecosystem is referred to as a 'fire regime'.

This past week, we performed our first burn of the season on a small section of Wolf Haven. It 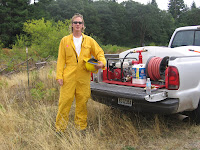 was a small burn, only about 2 or 3 acres, and we had over 20 people to manage it! Many of the folks at the burn, including myself, were first-timers on a prescribed burn, so this was was as important for training as it was a trial to see how the prairies at Wolf Haven respond to fire treatment. Our Burn Boss tasked the Nature Conservancy Crew with holding the western line, and the East Olympia and Thurston County firefighters managing the eastern line. My coworker managed the TNC pump truck, which provided one water source. My job was keeping fire from creeping across the burn lines into our fire break, which was a mowed area. 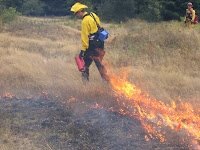 Ideally, fire breaks are best as bare soil, but since we want to restore the prairie, and not leave permanent scars on the land, we simply mow the fire breaks and keep them doused with water. The winds were from the south, so we began at the north end of the unit and started a test fire. After observing how the test fire behaved, the burn boss decided to continue the burn. A person on each end of the fire line would use a Drip Torch to ignite a line of grasses that "backburn" into the wind. The wind tries to push the fire across our fire break, but we use water and flappers to prevent it, which is referred to as a wet line.

Once the fire has crept far away from our line, the two igniters move the fire towards the center, 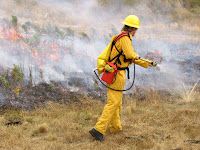 where the wind rapidly sweeps it across the unit and creates what is called a Head Fire, hopefully creating the right conditions to accomplish the restoration goals. Once the head fire reaches the burned line, there is no fuel and it is contained, but if it ever crossed our blackline, the head fire would become a wildfire and could quickly become a problem. Another potential danger is wind throwing embers far over the blackline and creating a Spot Fire, which could become it's own fire and spawn yet more spot fires. In prescription burns, weather is monitored continually for bad conditions, and lookouts are posted to watch for spot fires. 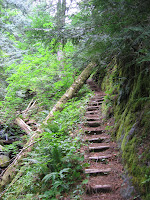 We continued this method of parceling the burn unit into chunks like this until the entire area is completed. Three acres of grass burns very quickly, so it was only about 45 minutes before only the poor, smoldering ruins of Thatcher ant mounds were left. These ant mounds are quite large, sometimes build to heights of 4 feet! Many chambers are tunneled under the ground too, with stored seeds and other organics that will smolder a long time. We needed to ensure these were doused before calling the burn completed.

Thatcher ants are really fascinating insects: they don't really bite humans, and they perform many beneficial services for the ecosystem by collecting litter and controlling bad insects from damaging the plants and trees. 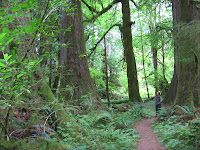 Their mounds can extend up to 15 feet below the surface, and perhaps for this reason they were one of the first animals to recolonize Mount Saint Helens after the 1980 eruption.

After a busy week, Lisa and I spent most of the weekend camping out at Big Creek, which is near Cushman Lake. The southern entrance to Olympic National Park is at the north end of the lake, and is called Staircase because nearly all the trails leading from there go in only one direction... up! We saw ancient Western Red 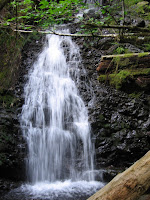 Cedar trees, century old manganese mines, waterfalls, and crystal clear water flowing down the Skokomish River. There wasn't much wildlife readily visible, except for a few squirrels and birds. Most of the birds were high up in the trees, and wouldn't come down to visit except for a Hairy Woodpecker and Stellar's Jays. We did see a pair of Osprey tending a nest high up over the river, so they seem to know where to find food - any maybe why we didn't see anything else.

I hope everyone else had an enjoyable holiday weekend too!
Posted by Mangrove Tom at 12:23 PM

You know, I set the sofa on fire when I was a kid (ask your wife). So I have experience in this. But seriously, you do have one of the coolest jobs Tom.

Hi Uncle Tom,
I like all the pictures and videos you have on your web site there really cool!!You have an awsome job.
Love,
Kelsey