Alone in the Wilderness? 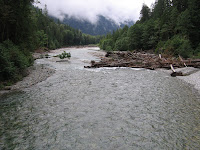 'Twas another exciting week of Reed Canary Grass carnage, interrupted briefly by skirmishes with Diffuse Knapweed and Tansy Rangwort. Some of the creek beds are very treacherous, with hidden holes several feet deep that make one trip while harnessed to a running brush-cutter. I fell into the same hole twice! Looking at my muddied boots, I now understand why they call it Muck Creek. Stink boot strikes again! 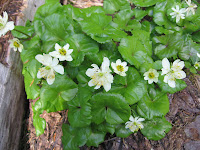 Astute readers may recall me discussing way back in February citing a Nature Conservancy study about the lack of connection to the average american to the natural world, with books such as "Last Child in the Woods" highlighting the increasing disconnect with nature and reality. Well, the good news is that from my recent summer experience, I'd say lots of folks are indeed enjoying the outdoors here in the northwest. 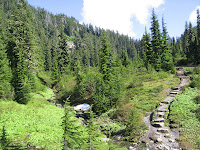 I recall reading some science fiction novels, such as "Earth", where embedded in the setting is the concept that there is so many people and too few natural areas that camping trips must be reserved far into the future and permits awarded by lottery. Well, the future is now: many hiking trips to very popular areas require permits to prevent the stampede of campers from destroying what they came to visit: the wilderness.

Nearly every major peak in the Cascade range requires a permit, 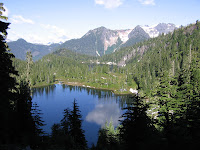 with popular places such as the Enchanted Lakes and Monitor Ridge being booked up months in advance. Campsites at many National Parks fill up early; I recall breaking camp last summer at 6am to reach the Camp 4 ranger station to ensure we got a site (note: all sites are shared to max capacity here), and there was already a line of other campers ahead of us... on a tuesday! Campgrounds accessible by cars are even more popular, with anything in or near a National Park or coastline being 100% full all weekend long during the summer. 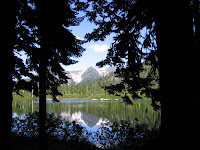 Time for another "Safety First message": I often sense a strange fear of nature from adults & children when they leave cars behind on a trail. The most popular fear that often exasperates me is, "are there poisonous snakes?". Deer and dogs kill far more people than mountain lions, bears, AND snakes. Let me reassure phobia suffers everywhere that the scariest thing in the wilderness is: weather, gravity, and kids with high powered rifles that think animals wear blue ponchos (and anyone else with a gun & poor judgement). That tragic accident happened within miles of where my friends and I camped this past weekend.

We spent Aug 2 and 3rd camping with friends at Horseshoe Cove at Baker Lake. It was cloudy 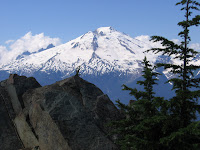 on Saturday, so we spent the afternoon hiking along a trail along the north end of the lake. Unfortunately, some of the bridges were damaged or washed out from floods this spring. We had to turn around after a short while, but still had a nice walk along the river and streams. Sunday, we checked out the views from Anderson Butte and made the short hike down to Watson Lake at the edge of the Noisy-Diobsud Wilderness. The skies were clear and sunny, and we had amazing views of Mount Shuskan, Mount Baker, and other rugged peaks in the North Cascades.
Posted by Mangrove Tom at 1:09 PM

I hope you get to see Big Foot

did you know it is illegal to hunt bigfoot in Port Townsend? How are you doin?