Working on a large military base can be confusing sometimes; there's lots of protocol to follow 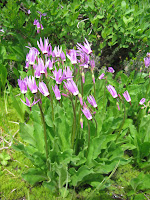 and lots of activity. The geography itself is very confusing, with so many roads crisscrossing the prairies and woodlands that it seems like a maze... in fact one of the training areas is referred to formally as The Maze.

We continued our activity of clearing Reed Canary Grass from Muck Creek. Muck Creek was once an important Coho & Chum salmon hatching site, but it has become so choked with vegetation that the water level dropped too much and weeds became too thick for the fish to swim through. The Nature Conservancy and the Fish & Wildlife biologists hope to restore the hatchery by removing the tangled mass of invasive grass and planting native ash trees to shade the banks and steal the sun away from the weeds. 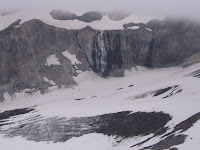 This past Friday, my previous boss from the Florida Keys Nature Conservancy came to the Northwest to attend a wedding. We caught up on news and then spent the day playing in the snow at Mount Rainier National Park. We went to the Paradise area, since it has lots of trails that loop through alpine meadows, with nice views of the summit and surrounding peaks. It looked as if springtime had just arrived. We walked past Myrtle Falls, and next an area scoured a thousand years ago from a jokelhaups; a catastrophic debris flow caused 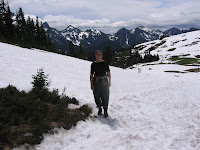 when a volcanic eruption occurs underneath a glacier. The landscape, devoid of any topsoil, still resembles the moon, even though nearby ridges are filled with cheery wildflowers. Another great sight was seeing a waterfall disappear underneath the Nisqually glacier, emerging again a few miles down the valley where the snout of the glacier forms the headwaters of the Nisqually River. I can also check Hoary Marmot of my lifelist, and have now seen all three species of marmots in the USA.
Posted by Mangrove Tom at 11:13 PM

Do you think the marmot crossed you off his lifelist???

Fair question, John. Now, if only I knew how to speak marmot I could ask him.