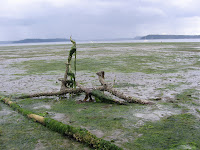 Just a quick update for this week, since time is running short:

We went to Explosive Ordinance Training last week, which was excellent timing since artillery began practicing over our heads as we hunted down mouse-eared hawkweed. I'd never heard the sounds of shells whizzing over head before, and it was a little nerve-wracking at first, especially when the *boom* of impacts begin echoing with the *booms* of firing - stereo pyrotechniques. 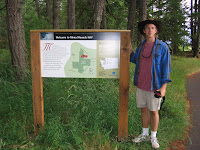 For the holiday weekend, we decided it would be a busy camping weekend, so we explored nearby parks as daytrips from Tumwater. We saw Rainbow Falls, Millersvanya, and Tolmie state parks. Lot's of folks were out enjoying the weekend, and we saw Winter Wrens, Western Tanagers, Bullock's Orioles, and other pretty birds. Lots of sanddollars were hiding in the mud awaiting the return of high tide at Tolmie, so that was interesting to see.

Tonight, I'm off to chase bats around on Fort Lewis!
Posted by Mangrove Tom at 9:54 PM

Tina wants to know if you are working on a mullet