Sometimes the Plants Fight Back 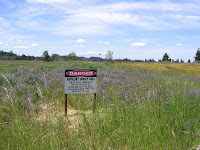 Twas another exciting week here in Thurston county, Washington. Our mission was to eradicate Diffuse Knapweed in an nice prairie also known by Fort Lewis personnel as Mortar Position 13. It may seem strange, but military bases often provide excellent wildlife habitat for two reasons: the land isn't converted to economic uses (such as farming) and it is also benefits from occasional fires from bomb training. Performing controlled burns on nature preserves is often difficult to implement for a whole variety of reasons, but the military needs to practice, and their practice often creates disturbances that can help restore 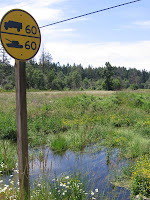 ecosystems. In the South Puget Sound area, these burns help keep the forest trees from encroaching on the prairies, and some weeds such as Scotch Broom are not tolerant of fire.

Military disturbances in natural areas do have drawbacks, such as the lack of large grazing animals on most areas, probably because the sound of gunfire is a deterrent. Other drawbacks include tripping up yours truly with rusted razor-wire underneath the Reed-Canary grass, or falling into a hidden impact crater with a full backpack sprayer. Do you know what it's like to fall in the mud and get kicked... in the head... with an iron boot? Of course you don't, no one does. It never happens. It's a dumb question ... skip it. 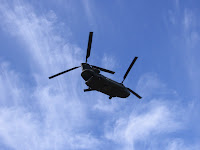 My coworkers even fared worse, since the grasses were in full bloom and wading through a dense, six foot stand would leave clouds of pollen and seeds drifting all around. Sneezes, watery eyes, red skin, and even welts made for a tough afternoon for them. I spent the hot afternoon battling against Sulfur Cinquefoil. I was wishing I could call in reinforcements, when a Chinook helicopter came rushing around the oak trees and passed right over my head. Even though 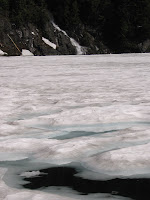 I felt like it was a tough day, I know the soldiers training around me, and especially those deployed, have much, much tougher days. Squaring my shoulders against the weight of the backpack, I resumed my silent war against the weeds.

The weekend was off to a rough start, with a flat tire in the Capitol Forest near home. The clear skies did provide excellent view of Mt. Rainier. We decided to beat the record-breaking heat (92 F) by running to the hills. At Snoqualimie Pass, we met some friends and hiked along an abandoned railroad track that led into the mountain for 2 miles. Then we hiked another 4 miles along a sometimes snowy canyon trail to Annette Lake, still covered in ice but with several waterfalls right at the shoreline. Lots of other folks were out enjoying the nice weather and escaping the city, which meant finding an open campground was not easy. We camped near a big lake and spent Sunday hiking a nice nature trail and then a short hike to spectacular Franklin Falls, one of the most scenic spots I'd ever hope to see alongside an interstate highway! Debris from last winter's avalanches were still evident all along the roaring riverside, but the snow was melting fast.

I returned back to civilization to hear a message of a friend back home recovering in the hospital, so best wishes for a fast recovery, Del Mar!

Have a happy 4th of July Weekend!
Posted by Mangrove Tom at 10:06 PM