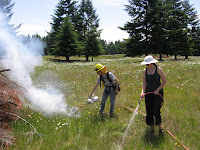 It was a great week. We hunted Diffuse Knapweed while armored personnel carriers zoomed past. It is considered a high-priority target on the natural areas because we have a decent chance to eradicate it, compared to management strategies of other pests such as Scotch Broom which must be controlled from taking over prairies, but is just too prevalent to remove completely. The last two days of the week, we attended a S-130/S-190 refresher course, where we reviewed the 10 Standard Orders and 18 Watch Out Situations. We also played with "sandbox" scenarios where we designed controlled-burn scenarios and then put together teams and equipment to implement them. These exercises were specific to some of the prairies we plan to burn to control Scotch 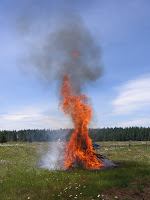 Part of the prep work to burn them is to first burn the brush piles that are near the edge of the planned fire lines. So this was our Summer Solstice bonfire celebration! My designated role was to patrol areas on an ATV modified with water tanks and a pump. I searched far downwind of the fire and search for spotfires being set by errant sparks, but fortunately nothing bad happened. Unfortunately, northern California did not fare so well the following day, with an incredible 840 wild fires igniting from a lightning storm. If you know how to do a rain dance, please send them some nice, cool, steady rain! 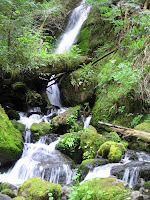 After this hot, dry work, we needed to cool off. For the weekend, we went on a hike through the Quinault Rainforest. One of our plans was to climb up Colonel Bob, but the storms from last December had toppled many trees and washed out bridges, so many trails were still closed. Snow still lingers as low as 2500 feet, so we might try back again later this summer. We did have a great time hiking, seeing the world's largest Sitka Spruce Tree, many waterfalls, a big lake, a mama merganser giving her baby chicks a ride on her back, banana slugs, and a Ghost Squirrel!
Posted by Mangrove Tom at 10:28 PM

Tom, you take some of the most beautiful pics - I love coming here and seeing them even if I'm not posting. Thanks for sharing.

Thanks, Matt! It helps when the scenery is so gorgeous to begin with.