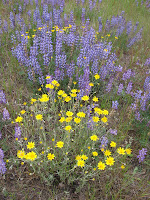 I've recently been working on helping to maintain the Mima Mound prairies. These prairies are about 15 miles south of Olympia, near Millersvania State Park, and they contain many small hummocks about 2 to 3 meters tall, scattered evenly across the plains. Nobody is certain how Mima Mounds are formed, but the prevailing theories all like to employ glaciers that deposited the unstratified sediments as the terminal moraine retreated. However, similar prairie mounds occur in other parts of the world where glaciers are not thought to have existed, so one theory that tickles my fancy are that the mounds were formed by an extinct Pleistocene Giant Gopher colony! What is more certain is that mankind has been maintaining these prairies for a long time -- the native Americans routinely burned these lands to keep the forests in check so that they could harvest rich camas lily roots and other edible plants. Now, it's my turn. I worked along some dedicated volunteers in keeping the notoriously pesky Scotch Broom in check by brush cutting it down, to make room for the native plants like the Lupine and Oregon Sunshine 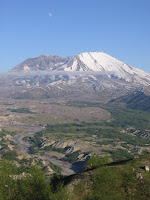 in my photo to the left.

Speaking of glaciers, we went on a short road trip to see the world's youngest glacier: Tulutson Glacier inside the crater of the active stratovolcano Mount Saint Helens. The newly built lava dome rising from the floor of the crater had split the glacier into two lobes, but as of this past month, enough snow had fallen to make the glacier whole once again. It now has as much mass as the glacier on Mount Rainier, and still growing!

We stopped at several waterfalls along the way, and each of the visitor centers too. Weyerhauser has sponsored a really nice visitor center called the Forest Learning Center. They do a good job of showing how logging isn't always at odds with ecological interests, and nowhere is that more apparent than at the edges of the Monument where tree planting did not occur. Granted, an even-aged stand of single species trees isn't 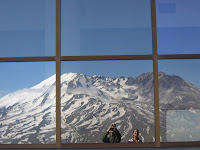 exactly diverse, but it's a heck of a lot better than stinking sulfurous ash.

It was terrific witnessing the view from Johnston Ridge Observatory, which houses the webcam we've been watching for years at our home in Plano, TX and from Big Pine, FL. We could see steam rising from three different vents inside the crater, and areas along the rim that looked like very recent avalanches and 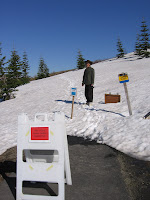 rock slides. Even from binoculars, it was scary to witness geologic forces on a mountain-size scale at work. We could see a herd of elk munching on grass far below. Inside the Observatory, there was a seismic station recording small tremors in real time, so Saint Helens is still stewing. Unfortunately, the snows has been so heavy that the trails were still closed. So we drove back down to Coldwater Lake, a brand new natural lake formed by the massive landslide from the 1980 eruption that dammed Coldwater Creek. Castle lake across the desolate Toutle valley is another new landslide lake. While we were eating or cheese & oysters, an osprey hovered over the greenish waters, hoping for a meal. 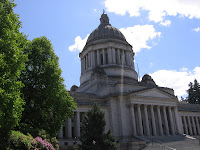 Sunday, we spent at Priest Point Park here in Olympia. The low tide was rushing in, so we were able to see a small tidal bore come rushing in, and the clams squirt in joy for the return of water. Nearby is the Farmer's Market, full of yummy food, fresh cheese, live music, and a giant Fushia that now lurks over our patio with its purple blooms. We strolled around the Capitol building and stumbled into a tour that was just beginning, and learned a little about the building (such as why there is a can of beer in the timecapsule) and Washington politics. One interesting fact; the world's largest tiffany lamp that hangs from the dome was reinforced with a kevlar tether after the 2001 Nisqually earthquake.

It's sometimes a little disconcerting to realize that underneath the entire Cascade range, an ancient continent is meeting its doom! But it's bedtime now, and I need some sleep... maybe I'll dream of Cheese Days.
Posted by Mangrove Tom at 11:18 PM