Beavers in the Mist 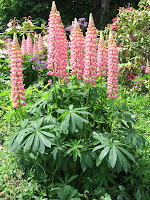 Another week has zoomed by here in the South Sound area. This week, we worked with a biologist to survey wildflower plant plots. These plots were planted in coastal prairies to determine how successful different techniques were for seeding and transplanting certain wildflowers. These wildflowers are important as host plants for the endangered Taylor's Checkerspot Butterfly, so the hope is by restoring prairies quickly with these key plants, the butterfly population will quickly recover. Ideally, the end goal is to establish a mosaic of quality habitats occupied by the butterfly (and more importantly, the caterpillars), which would make the population more resilient to disturbances such as wildfires.

We also spent 2 days running a tractor, backpack sprayers, and an ATV with a powered hand sprayer to go after Tall Oats Grass. It was my first time driving a tractor in several years, and this one had some differences to get used to, including a very touchy clutch that made driving with a full tank mounted on the back a little exciting at times! Almost like being in a tractor pull -- yee haw! 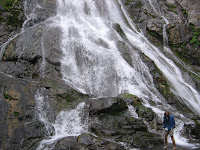 For the weekend, we loaded up the truck with camp gear and went for a loop drive around the Olympic Peninsula. There was still snow on the mountains, and the streams were all running full bore. We saw many waterfalls, such as Rocky Brook Falls (left photo), Marymere Falls, Madison Falls, and the spectacular Sul Duc falls.

We saw the Dungeness National Wildlife Refuge, which has a really, really long spit that reaches out to a lighthouse. It was so cold and windy, that we didn't dare walk very far out away from 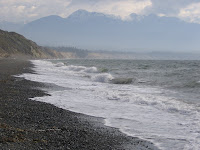 the mainland, but we did see some impressive scenery, such as the huge logs stranded upon the sandbars, the mainland cliff, the Juan de Fuca straight with the mountains of British Columbia off to the north, and the snow-covered peaks of Hurricane Ridge to our south, near where we'd camp for the night. There were 2 really brave and very athletic adventurers out kite-surfing in the protected lee side of the spit. The winds must've been gusting to 15-20 mph, so they were really flying across the water... the cold, cold water. bbrrrr! 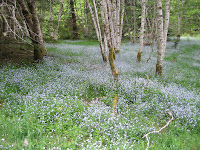 We spent the evening in the pleasant campground of Altair. It's along the roaring Elwah river, which was grayish-white from the silt at floodstage. We saw a huge beaver come swimming out of the mist and forage along the banks, deftly missing the dangerous currents swirling all around. People were very nice, and our neighbors even loaned us some kindling and starter log for our fire. Maybe they felt bad for us, since we were getting a very late start on dinner... but hotdogs fortunately don't take long on the grill. I was hoping to get a view of the sky to see the ISS and space shuttle Discovery fly past, but there was no chance of that with a dreary drizzle falling down.


Sunday, we saw Crescent Lake, a 650 ft deep lake formed from an ancient retreated glacier that left behind a moraine dam. Then was our hike to the roaring Sul Duc falls, which was perhaps the highlight of the weekend. We saw several elk and black-tailed deer that morning, including a newborn fawn near Mill's Lake. The trailhead for Sul Duc falls is near the hot springs, and there 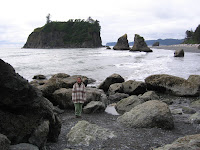 were still melting piles of snow in the forest!

Finally, we were running out of daylight and only had time for one last stop -- Ruby Beach. This was a dramatic stretch of coastline facing west into the Pacific. A perfect place to end our trip. We explored among the rocky coastline, and got a nice view of a new lifelist bird: the Black Oystercatcher. 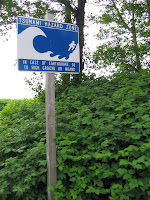 Tom, are those lupines in the first pic? Very nice. Also, if you are still in the area in Sept/Oct you might want to consider hopping a plane to Alaska to see the Northern Lights