Toto, I don't think we're in the Keys anymore... 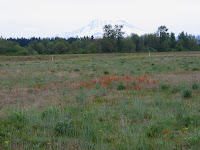 This was my first week at my new job with the Nature Conservancy. I toured several of the prairies I'd be working on this summer, and learned many new plants; both the good (natives) and the bad (non-natives). There are over 80,000 acres of natural areas, mostly preserved on the military base Fort Lewis, named after (Lewis Meriwether of the Lewis & Clark expedition, which reached the end of the Columbia river not far from here). This ecosystem is unique, and home to many rare plants and animals; for instance, in this photo is the Paintbrush Castilleja and the nesting grounds for the endangered subspecies, the Streaked Horned Lark. These prairies are part of the glacial deposits of the Nisqually plain, whose drainage begins on the slopes of nearby Mt. Rainier. 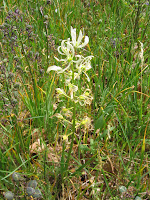 While Poison Ivy is present here in the lower elevations of Washington, I'm pleased to report that it's nastier relatives such as Poisonwood are nowhere to be found. Instead of Nickerbean and Acacia, there's Himalayan Blackberries and Stinging Nettles, and in place of Manchineel there is Death Camas (the pretty white lily in this photo). At the Nisqually National Wildlife Refuge, I found myself constantly scanning the freshwater marshes for alligators.

The refuge was a really great place to get acquainted with the local flavor of plants and animals. We walked over 7 miles there, and saw many birds, bugs, plants, and a beaver-thing (a nutria, perhaps?). Often, there are sightings of seal lions and river otters, but we weren't so lucky. However, we did see a Rufus Hummingbird nest and I added several new birds to my lifelist: Tree Swallow, Band-tailed Pigeon and Wilson's Phalarope. There were many ducks in the water, with little fuzzy ducklings earnestly swimming after mama. Other notable birds for us were Bald Eagles, Townsend's 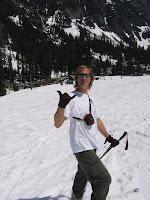 The Cascade range had a very good winter for snow, and some of the ski areas were open for Memorial Day weekend, which had never happened before. Since it had been WAY too long since the last time I went skiing, and the snowbase was still > 100", this was too tempting to pass up. We ended up in Alpental along Snoqualmie Pass. It was great to be playing out in the snow wearing light pants and a T-shirt! The snow was melting fast, and there were no less than 6 big waterfalls that could be seen along nearby cliffs (one can be seen far behind me in this photo). 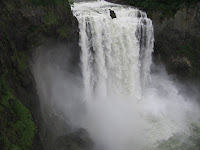 After skiing, we drove onward towards Seattle to visit with an old friend of mine, but not before stopping at the touristy hotspot of Snoqualmie Falls, which was roaring at full intensity and splashing everyone way up on the rim with cold mist. We had a nice evening of tasty Indian food and fun games (I lost). Another very exciting historical event that occurred while we gazed over the falls; the Phoenix Lander successfully touched down upon the north pole of Mars... a day for snow, ice and water here and afar! 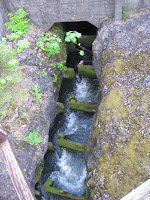 For Memorial Day, we toured several geocaches around town, such as nearby Tumwater Falls, Priest Point Park, and the state forest. It was fascinating to a fish ladder in person for the first time; a series of concrete pens that had small chutes to let water channel through them and let the salmon swim upstream past the dam.

Next week should be fun. We start tomorrow with a plant plot survey on Johnson Prairie.

I hope everyone had a wonderful holiday weekend!
Posted by Mangrove Tom at 12:14 AM

I was reading ur blog posts and found some of them to be wow.. u write well.. Why don't you popularize it more.. ur post on Indian animals took my particular attention as it is an interesting topic of mine too ;)

BTW I help out some ex-IIMA guys who with another batch mate run www.rambhai.com where you can post links to your most loved blog-posts. Rambhai was the chaiwala at IIMA and it is a site where users can themselves share links to blog posts etc and other can find and vote on them. The best make it to the homepage!

This way you can reach out to rambhai readers some of whom could become your ardent fans.. who knows.. :)