From Sea to Shining Sea

In one age, called the Third Event by some, a wind rose among the Cascade foothills far to the west. The wind was not the beginning. There are neither beginnings nor endings to the turning of the wheel. But it was a beginning. (friends on my last job were always tossing around obscure references that went way over my head, so this is payback.)

As the title of this blog hints at, I'm off to Washington to begin my next job: working with The Nature Conservancy to restore coastal prairies in the foothills of the Cascades!! This photo (copyright by Keith Lazelle) is to be my new 'office' until this October! Yes, that's Mt. Rainier in the background!!! w00t!!

I miss the Florida Keys already. The director took us out on a research trip on the boat from 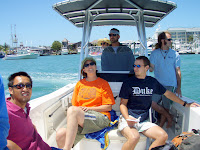 Boca Chica to Woman Key, stopping at the historic wharf in Key West for some tasty sandwiches. Woman Key has large stretches of beach protected for sea turtle nesting -- even a Leatherback has been spotted nesting there, although it's mostly Hawksbills that use that beach. You can see survey stakes that mark some of the old nest sites. There were also lots of seashells, like stout seabiscuits and delicate scallops, hamburger beans, and sadly, a dead gannet and blue-winged teal washed ashore. My boss-boss even found a stash of pirate brew! *urp* Then, we sped over to an excellent little patch-reef for some snorkeling, which had a resident nurse shark and a little juvenile hawksbill sea turtle. That evening, we had a cozy campfire at my favorite hangout: spooky house on Big Pine. It was the best send off I could have! 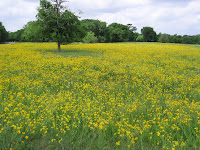 When I returned home, the pace of things did not slow down: birthday party, then off to Austin for a "Snakes & Arrows" concert and camping at McKinney Falls, where I saw a western kingbird in the tree by this meadow. There were painted buntings, blue-winged teal, and a red-shouldered hawk too. Then I drove to Bullard to see nieces dance, and I've been catching up with local friends in the time inbetween. Whew!! Right now, I should be frantically packing and shoring up the ol' homestead, since I'll be leaving soon... but instead I'm off to Galveston for the weekend to visit my brother's families and help with a chili cookoff. Tonight, I'm providing entertainment: juggling torches for the first time in my life! 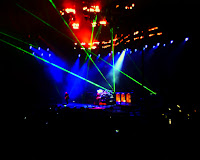