The Journey to Tumwater Hill 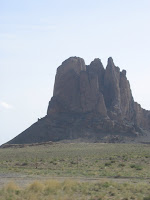 We left on a Monday morning, with not yet having a place to stay or having seen the Northwest. 2,300 miles later, we finally made it to Olympia! Originally, I had planned on taking 8 days to make this drive, with some time to camp and explore the country we'd be driving through. But having never traveled before with cats, we wanted to keep things simple. It was almost like self-imposed torture to be so close to many national parks, monuments, forests, and wildernesses and not be able to experience them. Even from the seat of the car, the scenery was exciting, such as Shiprock, the Way of the Ancients, and Valley of the Gods, and the thrilling drive up Moki Dugway.

We did make time on the drive to tour around Natural 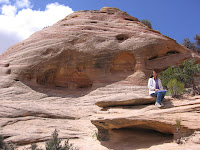 Bridges National Monument, and did a few short hikes while cats slept in the car. I was surprised by how much snow was still hanging on the mountains, even as low as 8,000 feet. The short hikes we did took us past inspiring landscapes of sandstone, which still showed the dune forms with petrified cross-bedding clearly visible in the weathered rocks. From one cliff, we could look down into the cave that sheltered Horse-collar ruins, an ancient and unique Anasazi home that was abandoned 700 years ago as the climate became too dry to support their farming practices. 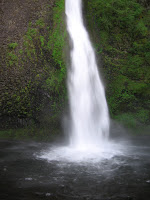 We then drove through more beautiful canyon lands, and across the office space of my former crew boss's, Capitol Reef National Park. He lives in a quaint old farmhouse, so we hope to visit him again on our way back home and this time make plans to stay long enough to explore more of the area. After a huge dinner at Diablo's, we blazed tracks all the way to northern Utah. Our last day we made it to the Columbia Gorge just as the sun was setting, and had time to enjoy the cold spray from a few magnificent waterfalls, such as Horsetail and Multnomah Falls, which are the 2nd highest falls in the USA.

We arrived in Washington at nightfall, with the snow on distant mountains looking ghostly by the moonlight. We spent the next day viewing apartments and settled on a place in Tumwater, whose claim to fame is it is the gateway to the Inside Passage (with awesome looking totems that look out from the bridge to the Sound), as well as the site of the first pioneer settlement in Washington back in 1845. On our walk at nearby Tumwater Hill park, we can see the state capital, the sound, and most impressively, the peak of Mount Rainier. The forest is full of unfamiliar plants; huge maples, stinging nettles, lush ferns, and many others that I'll need to learn soon.

Today was our first full day in the apartment, which we spent hitting up garage sales across town, buying lots of used furniture and getting used to driving around town. Tomorrow should be a fun day of hiking around nearby parks and getting ready for my first day on the job as a Prairie Restoration Tech!
Posted by Mangrove Tom at 12:19 AM

Nice pictures Tom. Anxious to hear about your adventures. I have always wants to go to the Pacific NW.

Tom, when do you start working, or have you started.