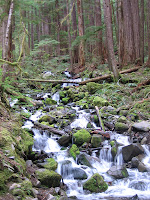 Perhaps those of you who are fluent in Hupa translated this week's title into native Indian, "ista:ngq'eh-k'itiqowh", which is also the Hupa name for the Fisher, aka Martes pennanti. Personally, I prefer the Hupa name for it, even though I can't pronounce it. That's because Fishers don't eat fish, or clams, or crabs, or anything else aquatic. Instead, these large weasels like to scamper among dense forests and hunt squirrels, mountain beavers, snowshoe hares, voles, grouse, and the occassional porcupine. What is exciting news about Fishers is that they have returned to Washington after a long absence. About 100 years ago, Fishers were extirpated by a greedy bunch of Elmer J. Fudds, but now a 3 year reintroduction program has just begun. 25 Fishers were released early this year, so it was possible that we were being watched by a pair of curious, jet-black eyes from a tree branch high above the trail. 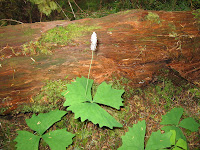 This past week was spent chasing after Mouse-ear Hawkweed, which is considered a high-priority target on the coastal prairies because it has yet to become a widespread invasive and also due to its allelopathic roots. Another invasive is the Hairy Cat's Ear. But some of the native plants have funny names here too, such as Deerfoot Vanillaleaf, which is the photo to the right. I spent all this cool, rainy week working of invasives, and then had to catch an amazingly early flight back to Dallas to attend a wedding. The afternoon we returned, we spent the day with some friends touring the Seattle Aquarium. They had lots of excellent exhibits, including two giant octopus, their own salmon tower with fish ladder, a giant tropical clam (very striking colors), invertebrate petting zoos, sea otters, a huge "walk-through" aquarium, seals, and my favorite: a pair of playful river otters. 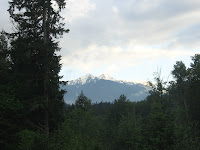 As you may recall, 2008 is Year of the Frog. Consider signing their petition! I bring this up again because they are having a very unique auction to raise conservation funds: get your name immortalized by bidding on an auction: naming rights to a new species of frog!

I hope to see some Giant Salamanders soon; seems like we've been at the right places, but amphibians tend to lurk in the mud and don't come out in the open very often. We'll have to see what adventures await us next week.
Posted by Mangrove Tom at 8:42 PM