Up on the watershed

I just added yet another weed to my death-list, Reed Canary Grass. This grass has the bad habit 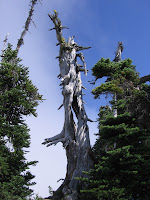 of smothering riparian habitats, which is very detrimental to wildlife. The grass forms a dense matting of roots and grows over 6' tall, which totally chokes out any plant diversity. Over a few years, the grass becomes so thick that it actually begins lowering the water table, slowing stream flows, and making it difficult for aquatic animals like fish, frogs and newts to make a living. About the only good thing to be said for it is that it controls erosion very well, which astute readers might recall is also the reason the invasive plants Kudzu and Salt Cedar were intentionally planted with eventually disastrous results.

Treating Reed Canary Grass is difficult, since the grass first must be cut down, and then after the shoots begin reemerging from the root mass, the plants must be sprayed with glyphosate, with care to protect the aquatic habitat. Stream beds are often tricky terrain to drive a tractor, being uneven ground, muddy, and often with trees, shrubs and other obstructions. This means cutting Reed Canary requires a small army of people armed with 2-stroke brush cutters, who must return when the shoots emerge and use backpack sprayers to finish the job. Often, this process must be repeated two or three years in a row to 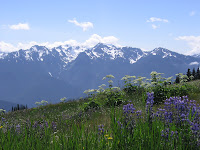 finally control an established infestation. The results are worth it though; higher stream flows and a healthy variety of plants that magically brings back the birds, bugs, and small fry.

For this week's adventure segment of this blog, we ventured to the watershed of the Elwah river, at Hurricane Ridge in Olympic National Park (we are seated at the picnic table around noon with the orange daypack). Most of the snows had melted and it was spring time on the mountain sides, with wildflowers in full bloom. 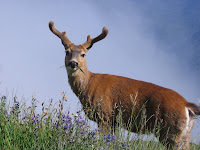 This national park is a very interesting place; the mountain range is old, and still growing, but it receives so much rainfall that it erodes almost at the same rate the mountains rise -- keeping the elevation constant over time. These mountains stopped the advance of the continental glaciers during the last ice age, protecting a peninsula from being buried under massive amounts of ice. However, the glaciers completely isolated the Olympics from the rest of the mainland populations further south. Therefore, the Olympics are home to many endemic and rare species, such as the 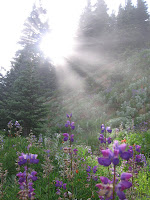 Olympic Marmot and Olympic Chipmunk, both of which we were lucky enough to see.

We did a short hike to Hurricane Hill, which became shrouded in clouds rolling in from the Juan de Fuca straight. The following day, we hiked along the ridgeline all day long, basking in views of both mountains, ocean, and in the far distance, Vancouver Island. We added two more birds to our lifelist, the Blue Grouse, whose booming voice could be heard faintly in the cirques below the ridge, and the cheerful Hermit Warbler. The snowshoe hares and black-tailed deer have learned to find protection from predators by staying close to humans, who are not allowed to hunt in National Parks, so we were able to observe them closely. 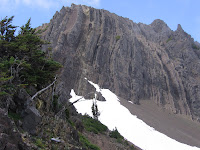 I was very exciting to get views of the glaciers surrounding Mount Olympus. We are already planning a trip along the Hoh river valley to approach Olympus from the west. The range closest to us had the Mount Carrie glacier, which feeds into the Elwah river. Crevasses and bershrunds could be clearly seen in our binoculars, giving clear indication how dangerous climbing glaciers can be. Another interesting thing to learn was that the Elwah river is the site of one of the most aggressive watershed reconstruction 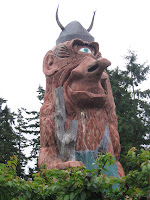 projects in the USA, which begins this year! It might be tempting to return in 2014 to witness the deconstruction of the Port Angeles dam.

A new feature on this week's blog is "Safety First with Mangrove Tom": always keep in mind the 10 Hiking Essentials and be well informed of potentially major weather changes. By far, the biggest danger in nature is not wild animals or trolls or starvation or other dramatic 'as seen on TV' troubles -- it's exposure to heat or cold, with cold being the most dangerous -- and beware of snowboards!
Posted by Mangrove Tom at 3:34 PM

The Troll Cyclops was cool... and very huge (note the little birdie on his horns). There were also dragons and other weird troll sculpture, and an entire castle!