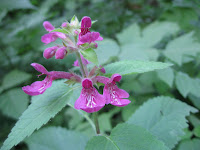 The time between summer's solstice and autumnal equinox is upon us; summer is half over and so is my season with Olympia's Nature Conservancy chapter. The weather seemed to signal that summer's days are numbered, since a prelude to fall arrived in the form of rainy and cool weather. We are now wrapping up our Reed Canary Grass cutting, and will transition to late summer work schedules. There are several prescribed burns planned for the upcoming weeks, and I may be called in to assist with them. 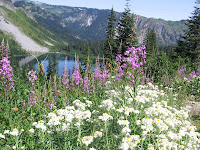 The blackberries, salmonberries, and thimbleberries are ripening on the prairies of Fort Lewis, and we've seen many signs that black bears have been feasting on them. We've also seen deer carcass, likely roadkill, that was dragged into tall grass and munched upon by either coyotes or bears. Along the oaks lining Johnson Marsh, we had an excellent view of a Red-breasted Sapsucker, another life-list bird!

Lisa and I decided to explore more of Mount Rainier National 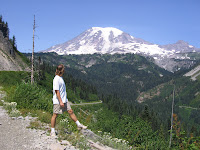 park, and we left early on Friday to secure a campsite... but the entire park was already full. Fortunately, Gifford-Pinchot National Forest borders the park, and we were able to nab a campsite at La Wis-Wis. This allowed serendipity to guide us to a wonderful cascade called Purcell Falls. Its icy cold waters air-conditioned the little canyon with cool, damp air that was welcome relief on a day with temperatures reaching record highs in the area. There was a pair of Winter Wrens chasing bugs in the moss covered rocks to feed their chicks hidden in a cliff-side nest.

At Mount Rainier, we first visited Grove of the Patriarchs, a small group of ancient Douglas-firs, western hemlocks, and western red cedars clustered along the flood plain of the Ohanapecosh River. There is a nice suspension footbridge across the river. The same clear, friendly waters under that bridge turned into a raging torrent a few miles further downstream at Silver Falls.

The following day, we explored many other sites, such as Martha Falls, Box Canyon, and Reflection Lakes. Martha Falls is actually a long series of tiers along Unicorn Creek, with a grand total of 650' of falls. We hiked down to one section that can be approached along the Wonderland Trail. Trees and logs from last winter's avalanche littered the canyon, and the ruins of two footbridges could be seen, one that was made from reinforced steel I-beams! The tier of the falls we could see from the trail tumbled over a columnar basalt palisade, and was the only trail at Mount Rainier we had to ourselves.

For the afternoon, we had a nice dayhike up Pinnacle Saddle. From the saddle, there are trails to The Castle and Plummer Peak, so I went up Plummer Peak. There were amazing views of Mount Rainier, with Mount Adams and even Mount Saint Helens could be seen on the hazy horizon. Along the same ridge as Plummers, Pinnacle Peak loomed nearby, with The Castle looking more like an ancient fortress and Unicorn Peak in the distance, whose snow banks become the headwaters of Unicorn Creek. There is a perfectly sloped snow bank on Plummer Peak that makes for an excellent glissade down a portion of the hike. Soggy buns are a cheap price to pay for a cool thrill like that in August! 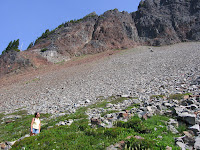 We hit up a few other roadside attractions, such as Narada and Christine Falls, and walked along a huge bridge that crossed the valley carved by the Nisqually Glacier that has retreated several miles upslope. The headwaters of the Nisqually churned a muddy brown below our feet, and occasionally a booming sound of a rolling boulder would echo up to us. We might return again this fall to see the first snows and the brand new visitor center at Paradise. Maybe I should've bought an Annual Park's pass this year?

Beautiful pics. I bet there are trout all over the waters there.

Thanks! There's some trout for sure, and most of the large streams support salmon out here too.