The Archosaurs of Arlington 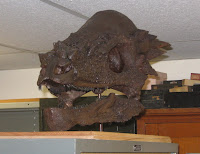 When dinosaur digs come to mind, the Dallas-Fort Wort metroplex isn't an area most folks would consider. But geologically speaking, there are some interesting things taking place, and I'm not just talking about the 2 earthquakes we've had in less than 12 months...

Yet the past several weeks, I've been volunteering with the Dallas Paleontological Society and the University of Texas at Arlington to search for fossils from the mid-Cretaceous era. The most interesting find at this dig has been many large fossil ornithopod bones that are from a duck-billed dinosaur, likely a new species discovered just 10 years ago in nearby Flower Mound, just across the international airport. This species is called Protohadros, since it is considered an early ancestor to hadrosaurs. Since the type-specimen is so far the only described find for Protohadros, it does not have a strong body of evidence. Therefore, finding a second specimen will really enhance what is known about this species.
Ironically, at the first site in Flower Mound (a road-construction zone), only the skull was well 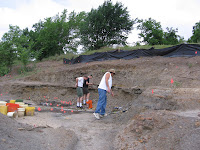 preserved. At the Arlington site, most bones have been recovered except for the skull. This makes matching the two incomplete specimens more difficult, so finding the skull at our site is the most pressing priority. As with anything inside city limits, it's only a matter of time before this dig site is buried under concrete in the name of Progress (the current landowner has been very gracious in allowing the university access to the site). Therefore, 2009 is the last chance research can be done at this site. A new museum, the Scotese Museum, will open up at the university (the photo above and below are from the collection), and Roger from the Dallas Paleo club taught a fossil prep session last saturday. 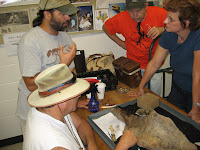 I've only found a few fossils: fragments from a turtle carapace, a small oyster, and a tiny gastropod. These finds are still very important, because they help characterize the environment that Protohadros lived, and helps paint the picture of the ancient coastal plain that was once north Texas. Near my house near Garland, several Mosasaurus skeletons have been found. One recent find is currently being prepared by volunteers at the Heard Nature Museum. 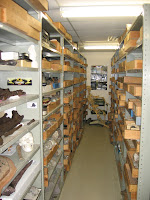 If you're bemoaning your lack of fortune for not living in Dallas around such wonderful geology, don't feel too bad. Chances are there are very interesting fossils near your house. South of Tyler, sharks teeth can be found along roadsides. West of Austin, there are all kinds of late Cretaceous sea shells. One of the more impressive sites is Dinosaur Valley state park near Glen Rose. Petrified wood can be found in some creeks near Giddings.

On another topic: I'd really like to thank all the volunteers and workers at wildlife clinics and rehab centers! I hope Gimpy the Grackle is doing fine.
Posted by Mangrove Tom at 2:45 PM

Interesting blog, I hope you will post more about your adventures in ecological restoration (which is where my passion lies as well). Keep up the good work fighting invasives, I know that is an uphill battle!