Stones of Summer (and some garbage) 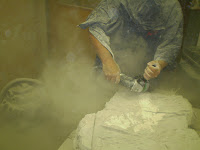 This summer has turned into a season of paleontology. I've been volunteering at the Arlington Archosaur Site most weekends, where lots of activity has been taking place. Around mid-July, it was decided to try some Texas-style research; Tractor Prospecting! They had just begun at the base of the hill not far from the main quarry when bones were exposed. A team of volunteers worked long hours uncovering the preserved remains of several animals, most notable being a large crocodile. It was a major find, and a major effort to extract it, in some majorly hot weather. All the local TV networks came out for the story, and the major newspapers. It was nice to realize how interesting this work is to the public, especially since this media blitz occurred right after the sad closing of the Laramie Geological Museum. (how can a university close a historic & scientifically important museum, but still spend 20 times more on recreational sports?!)

At least science museums in Dallas seem to be doing well. I was lucky enough to be invited along on a tour with some paleontologists who volunteered and worked with the Dallas Museum of 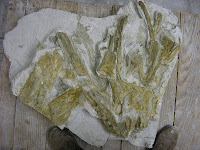 Natural History. We also stopped by SMU's collection, where I saw some amazing turtle fossils and get to touch a protohadros! Another volunteer invited me to work on preparing fossils from a mosasaur found not too far from my house, and now being housed at the Heard Museum. In the photo above, the plaster jacket is being removed. Plaster jackets are used to protect and move fossils found in the field by covering the matrix containing the fossils with paper, burlap, plaster, and battens. Once the jacket is removed, air-scribes and other tools are used to delicately remove stone around the fossils. Sometimes, the fossils are treated with resins to help hold them together. It's very loud and dusty work! (check out the huge tooth sockets in the jawbone at the bottom of this photo by Roger Fry). 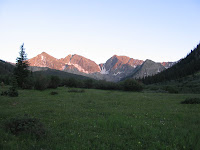 After all this hard work, I was ready for a vacation. My brother, a friend, and I went hiking around the Rockies. Our first stop was the the Collegiate Peaks Wilderness. We found an excellent campsite in a copse of trees, with the meadow having a stunning view of the Three Apostles, Mt. Huron, and Granite Peak. We did a short dayhike up to Lake Ann, which passed a small waterfall and the lost townsite of Hamilton. It's always a thrill for a Texan to put his hand in snow in late July, it seemed unreal after digging fossils in 104 degree heat. We also attempted to summit Huron, but a thunderstorm made us turn around after getting very close to the summit. On the hike out, we explored some of the ruins of Banker Mine and the ghost towns of Vicksburg and Winfield.

We then took a raft ride down the Arkansas river, through a fun section called The Numbers. To dry out, we headed west to the Big Cimarron area. This is my brother's favorite spot, and now I understand why. There are giant mountains, rivers, and most of the ridges are made from a pyroclastic tuff that erodes into all kinds of fantastic hoodoos. We climbed up Courthouse Mountain and bushwhacked up a ridge near our campsite to some neat formations we called The Pie Crust. After camping, we showered up at Ouray's hot springs and visited my bro's in-laws at Montrose, where I saw two lifelist birds: pinyon jays and a chukar. On the return drive, we stopped by the Black Canyon for a short visit to ponder the vastness of time for rocks, but lament the brief time of our short trip.

My worms, however, did not take a vacation. We've been dumping garbage on their heads since March, and they're finally getting the upper hand. My hometown offered a free class on how to create a worm bin, and even gave me a few tiny red wigglers to get started. At first, things progressed slowly, and I'd rarely see the worms around. I had to watch to be sure I wasn't smothering them with garbage. But either they've been growing, or maybe the warmer weather, or maybe my delicious coffee grounds has spurred them into a feeding frenzy. My bin is now half full and they are eating about half of our kitchen plant waste, soon it should be running at full capacity and I'll have to start sharing my worms. I dunno what the microbes in my compost pile will think when they're cut off from everything but leaves and the occassional weeds. After learning about the Medea Hypothesis, I'm very concerned about spurring a slime revolt!
Posted by Mangrove Tom at 3:51 PM

speaking of museums, i forgot to plug two ways to donate: