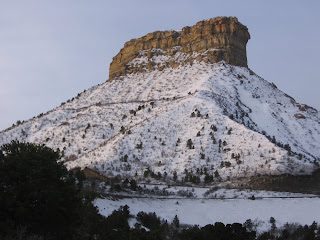 March always seems to be a crazy month; the weather changes with wild mood swings, plants begin showing signs of spring, birds begin migrating... and this year is no different.

Two weeks ago, I was offered a biological science technician position at Mesa Verde National Park. Considering we are to start mid April, that left a few scant weeks to prepare for the next trip. This past weekend, I just flew in from scouting out the greater Mancos/Cortez area to find suitable habitation. Originally, I was hoping to live in one of the cabins in Mesa Verde itself, but it was not to be. So in just two more weeks, I'll be living in Cortez.

Mesa Verde was the first national park created to "preserve the works of man", these works being the beautiful and archeologically enigmatic ruins of the ancient Pueblo culture. American Indians first arrived in the area around 550A.D., their culture began to flourish and they built many towns in the 4-corners region, such as Hovenweep, Aztec Ruins, Chaco Canyon, and many other impressive sites. This culture eventually faded soon after about 1200 A.D., and the 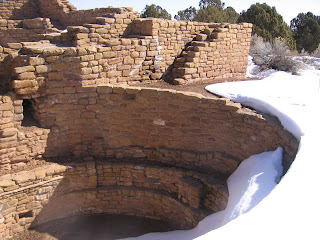 reasons for their disappearance is still debated, although one factor that certainly added stress and may have been the most important was the changing climate made their agricultural practices impossible to sustain such high density communities. Mesa Verde contains so many complete ruins spanning such a long time that it has been declared a World Heritage site.

The park also protects other important and rare "resources", the biological diversity. The Nature Conservancy classifies the entire Mesa Verde National Park as part of the Network of Conservation Areas (NCA) due to exceptional occurrences of rare plant and animal species.

Meanwhile, the Arlington Archosaur Site is off to another great year. Many croc and turtle bones have been recovered, and even a few nice therapod fragments. Unfortunately, I will not be able to assist again until October. I may still have a few chances to contribute to paleontology of the Cretaceous era, since most of the rock formations near Cortez were deposited in the great Western Interior Seaway.

I'll definitely be writing more about all this stuff, but it's time to get moving!
Posted by Mangrove Tom at 12:51 PM

Good luck with the move, Tom! I hope the cats enjoy the change of scenery. I'm jealous of Lisa and her telecommute!

Who on Earth would want to spend a summer with perfect weather, with the opportunity to view wildlife or fish for trout in crystal clear waters while enjoying the sweet sounds of nature away from the choas of "civilized" society.....