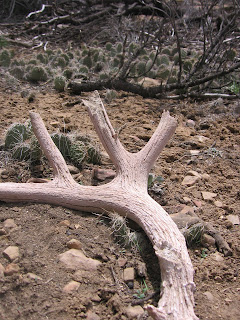 Yowza! We made it to our new cabin and have mostly settled in, and after much phone finagling we were able to get online once again. I began work yesterday, which was mostly an orientation and paperwork shuffle. We're a six person crew this year, so we have high hopes that we will more than double the productivity of last season's 3-person crew.

Leaving work yesterday, it was 70 degrees and REALLY windy, with gusts easily topping 30mph. It kicked up a huge dust storm that momentarily obscured the nearby mountain ranges and gave the sky an eerie metallic cast. As they say in many places, if you don't like the weather in Colorado, just wait a few minutes... yeah, heard that before. Woke up this morning to 28 degrees and snowfall! The drive up the mesa was ok, but looked like it could get sketchy.

Then, by lunch time it had warmed up and the snow melted away. We went for a short walk along Soda Butte to a burn area from 2008 to check on musk thistle. Found 20 rosettes, which we manually eradicated from the area! Hooray! Our first kill of the season! Things will pick up once we get our herbicide licenses. Along the hike, we found this interesting basin with a small hole that may be an archeological site. We took a picture to show the experts for tomorrow. 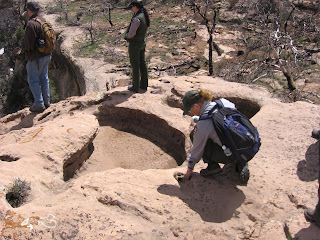 Leaving Texas behind during it's best month was hard to do; wildflowers everywhere and beautiful weather. But now that we're here, it's great to enjoy the great outdoors.
Posted by Mangrove Tom at 11:03 PM

Glad you're settling into your new digs. Mangrove Tom - Agent 009 - Licensed to Kill....Weeds.