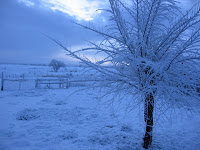 We have been watching the snow melt away quickly from the lower elevations here, and being from Texas, felt a slight twang of loss as the pretty snow left the nearby mesas and canyons behind. Imagine my surprise to wake up on Thurs the 22nd to several inches of snow on the ground. Fortunately the roads were in great condition, and we were able to look around a little before getting to work.

Earlier in the week, we had spent a warm afternoon surveying nearby Yucca House Pueblo for 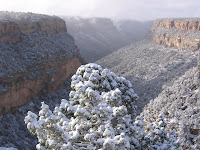 several weeds, such as Whitetop (aka Hoary Cress), Knapweed, and the ever present Musk Thistle. We found a huge claret cup cactus that was getting ready to bloom. The ruins themselves are difficult to appreciate: only one wall still stands, and the great kiva looks more like a crater. Large mounds are all that's left of one of the largest pueblos in the area. What was exciting was the vast number of sherds we saw, some with enough painting and markings to be identifiable. This ruin is still unexcavated, so it will be certain to thrill the archeologists who choose to research it. 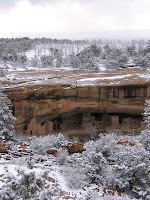 The following day was spent on Weatherhill Mesa, which is still closed. This summer will be exciting there as a new trail is being opened up to view Mug House Ruin. Something up there has been feasting on the Yucca, so that's a mystery we need to solve. Wild horses still roam the park, mostly at the behest of the neighboring Ute Tribe. However, horses are not native to north america (well, there have been other species of horses in ages long long ago, but not the modern Equus). They are beautiful animals, and those in the park are certainly wild, but if there is no way to keep a balance, both the habitat and the horse will suffer. As you might guess, we suspect horses may be the culprit.

This weekend was mostly spent playing house again (we scored a TV, loveseat, and stuffed elephant - among other treasures)! Sunday, we managed to tour the 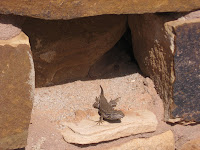 Canyon of the Ancients. We stopped at Lowry Pueblo and had the place all to ourselves. There is a very interesting Great Kiva there with strange structures inside. The mural inside the indoor kiva was deteriorating, but can now be seen at the Anazasi Cultural center. After that, we toured Painted Hand Pueblo, which so far has been my favorite "wild" archeological site. Very mystical feeling to the area. Further down the road is Hovenweep, which is a large collection of sites. They have a new visitor center and campground, with many ruins nearby. A canyon wren has set up home inside the Castle, and a Raven was laughing at us from Square Tower for having to hike around the canyon. Our brief foray into Utah brought us closer to the Abajo and La Sal mountains, still wreathed in snow. They are a little lower in elevation, so perhaps will be the first mountains we venture into... assuming they haven't been overrun with ORV trails.

Wish me luck for next week: red card refresher complete with pack test is on the schedule!

ps - just a reminder to readers: you can click on the photos to enlarge them.
Posted by Mangrove Tom at 10:03 PM