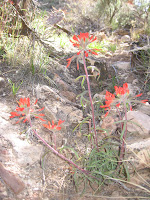 It's springtime! It seems everything from the air to the flowers seem to be renewed, in fact the federal government even presented me a certificate proving I'm officially refreshed! That's right, the RT-130 Fire Refresher and pack test is complete. Some of the material was reinforcing previous training, such as analyzing factors behind accidents and pretending to be a baked potato. We did cover some new topics too, including how to properly call in an aircraft order.

The cooler weather has resulted in a slower start for some of the weeds, but we are getting ready to begin knocking out the invasive exotic plants.

After cleaning and adjusting the backpack sprayers, we needed to uniquely identify them as ours. Mine has been christened Thistle's Bane.

The cool and damp weather this weekend also put a slower start in our exploring the nearby canyonlands. Instead, we hit up a few garage sales in town, patronized the library, and scored a few geocaches in the lovely town park (up to 900 finds!). We also tried one of the two chinese restaurants in town ($3.50 for a bottle of sake), and Once Upon A Sandwich. One of the local art establishments is worth a visit, Notah Dineh, which has many museum quality Navajo pottery, rugs, and other decorations for sale too. Another trading post down the store specializes in beadwork, and I couldn't leave without buying a dinosaur charm. 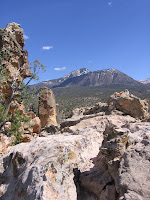 Staying at home isn't as boring as it sounds. We have great views of the La Plata range to the east, Mesa Verde to the south, and Sleeping Ute to the west. In the far distance is the Chuska mountains in Arizona. Below the hill are two ponds full of geese, ducks, and redwing blackbirds. Closer to the cabin are western bluebirds, Audubon's warblers, broad-tailed hummingbirds, among the usual cast of birds. Mule deer are seen each evening munching outside the fence, with rabbits, skunks, and lizards making guest appearances. There's 3 different types of cactus, prickly pear, claret cup, and rat-tail cholla. There's a venerable Utah Juniper in 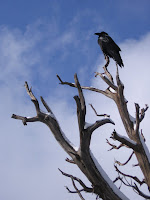 the yard that I suspect may be old enough to have provided shade to the Anasazi. Considering some Bristlecone pines are over 4,000 years old, they have stood testament over many changes to this land.

This week, I'll be gone for 3 days in Denver to obtain my pesticide license. That should put an end to the paper chase and we can finally begin the weed chase.
Posted by Mangrove Tom at 1:32 PM