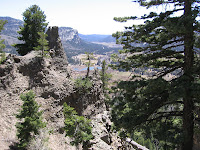 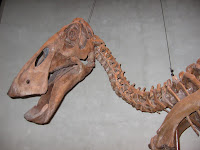 So that's the plan. We made the run to Denver last week and passed the supervisor exams, so that should officially end the paperchase for this season. I had the afternoon off, so I took the advice to check out the Nature & Science Museum. The paleontology exhibit was awesome, and I had to give close inspection to the hadrosaurs on display. Another favorite was the lifesize model of a Big Pig (Archaeotherium), that startles the crud outta people when they walk into the room and turn around. So numerous are these rhino fossils out in the badlands that the plains Indians have legends about the time of the Thunder Horses. The museum also had a nice section on Indians and Gems (including Tom's Baby). The human body exhibit was studiously avoided -- I'm the kid that was disturbed by dissecting the cat in highschool bio, so seeing a room full of flayed dead people in strange poses is not on my to do list.

On the drive back home, I stopped for a few leg stretchers along the way. My face quickly began 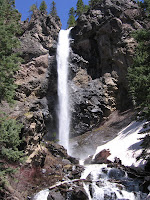 to freeze in the cold, snowy winds at Kenosha pass. Much nicer was the west slope of Wolf Creek pass, that has a nice path to Treasure Falls. The rapidly melting snow has the creek running full tilt, so the viewing area soaked me quickly! Brisk! To increase the excitement, the mist freezes in the fir tree nearby, forming icicles that were melting and falling down. It was nice seeing the Collegiate peaks and Crestone Needles still draped in snow, and I had to dip my hand into the headwaters of the Rio Grande. Brrr!

This week was notable for the first paleontological park opening in Texas: the Minerals Wells Fossil Park - where the public is allowed to collect for free! Too bad I missed the ceremony. I also missed attending the launch of STS-132, the last scheduled flight for Atlantis, but at least was able to watch her fly on TV. 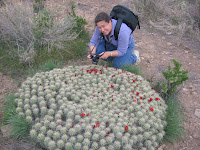 The work week went by quickly, since we're all business now. Lots of dead thistle, and we're just gettin' started. Last night, I was up till 1am helping with an owl prowl. We were surveying for Mexican Spotted Owls, which haven't been conclusively seen in the park for over 4 years. Once the owls would nest, sometimes in conspicuous places. There is concern that recent summer droughts are limiting the rodent population below critical thresholds needed to support more owls. On a more positive note, we saw a black bear on our hike into Wickiup Canyon, and heard many poorwills and a long-eared owl for much of the night. 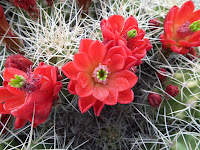 in modern times to protect the archeological sites. This year, a pilot program has begun to allow hikers a guided trip to see some of the ruins and experience the backcountry, such as Spring House and the Honeymoon Suite. Also along the trail is the rare and endemic Cliff Palace Milk-vetch. We are concerned that hiking will trample many of the plants, so we surveyed the population and flagged the plants we deemed in harm's way. Hopefully visitors will tread even lighter than normal -- since nobody should be a meadow stomper.