Bears, Bees, Buntings, and a Parrot 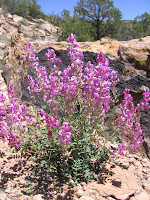 The past two weeks at Mesa Verde National Park have been eventful, so I apologize for the delay in updating the blog. I went with the Natural Resource manager on an evening survey for the Mexican Spotted Owl. It was almost too windy to go, but we gambled and it paid off with a very nice sunset and evening. On our hike up Wickiup Canyon, we stopped to observe some of the Cliff Palace Milk Vetch and saw a black bear ambling along the far side of the canyon near Buzzard House. We climbed atop the ridge just as the last light of dusk faded, and then began our owl calls.

At first, all we heard were the crazed calls of Poorwills along Bobcat Canyon. Towards the end of the first survey, we very faintly heard a few hoots, but couldn't identify them. Later, as we hiked down Navajo Canyon, we distintcly heard the calls again. The first guess was that it was a Flammulated Owl, but since the Long-Eared owl call is similar, we weren't sure until we returned to the office and listened to some recordings to eventually conclude it was a Flammulated. It's too bad we didn't hear the Spotted Owl, since it once nested in the park, but hasn't been observed in nearly five years. There's concern that a long-lasting drought is limiting their prey, which consists mostly of small rodents. Both the Mexican and Pacific Spotted Owls are in trouble, so it would be great news for it to return. 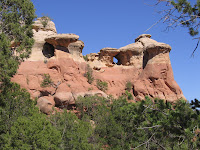 Weed killin' is also off to a good start. We went down to Mancos River Canyon to begin treating Whitetop (aka Hoary Cress). The willows along the river bank were a great birding area, and we saw many different species. The most exciting for me was when I looked up to see a brilliant azure bird shining in the sun. I hastily yanked out the binocs to get a better look and immediately recognized it as the Lazuli Bunting! My lifelist luck continued when we saw a Lewis's Woodpecker foraging in the utah junipers near our house while we were having dinner. It's another amazingly beautiful bird, with metallic green along the back and rosey-colored breast. 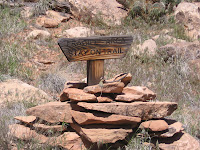 Another goal in the past two weeks was treating areas we expect to become busy with summer, the campgrounds and parking lots. Not very exciting terrain, but we added another new weed to our kill list: Houndstounge. For the weekend, we went on a trek down Sand Canyon, which had many Anasazi ruins along the trail hidden in the canyon. We also saw a lot of lizards, including a pair of Collared Lizards and this Whiptail enforcing the law. During our explorations in other areas, we noticed many ancient pottery sherds, but also spotted a tiny figurine. When I emailed the photos of the figurine to our staff Arche (short for archeologist), she became exicted and her boss recommended going back to recover the figurine so that it can be studied in the lab.
Typically, most sites are strickly in a non-collection status, even for research archeologists that 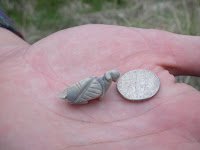 oversee the site. Only until funding becomes available to begin a proper excavation and research program is a site to be disturbed, otherwise important information would likely be lost or destroyed in a piecemeal approach. This means that the figurine will likely be replaced exactly where we found it, instead of going on display in a museum, the only exception would be if the piece is of special significance. We were able to find the tiny artifact again, and the arche decided it was made from stone and probably represents a parrot. Once the lab investigation is complete, we hope to know more about it.
Meanwhile, back at the ol' homestead, our neighbor has brought in many beehives. The worker bees are efficient foragers, and made a bee-line straight to our hummingbird feeder. Often, the swarm was over 20 bees. The birds didn't trust the bees, and seem to have migrated onward. Hopefully we'll find a way to make both the birds and the bees happy. 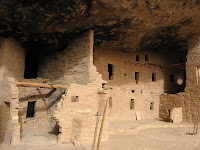