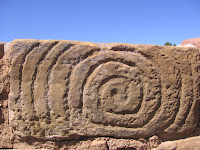 It's still early spring, and it looks like it's arriving slowly here in Montezuma county. Until the snow melts at higher elevations, don't expect too many alpine photos. Some ski areas were still operating on weekends, but we didn't want to risk bad weather on Lizard Head pass -- no snow tires, no chains, no 4wd, no dice.

Instead, this week was wisely spent exploring the lower canyonlands of the Four Corners region, which contain thousands of archeological sites. One of my job responsibilities is to measure 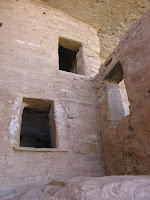 and map the flow rates of various springs and seeps at Mesa Verde National Park. We took advantage of nice weather to visit Balcony House ruins, which contains amazingly preserved architecture and two springs which were used by the Cliff Dwellers as a municipal drinking well. These springs are important biologically because they create moist microclimates where ferns, mosses, and even orchids can thrive, some of which are endemic to Mesa Verde.

It was really exciting to be exploring 800 year old ruins as part of my job! Sometimes, it's hard to believe I'm getting paid for this, until we return to the office to keep cramming for our upcoming pesticide licensing. The Red Card refresher course, complete with the dreaded pack test, is also looming on the horizon. Maybe they should call it the "regrunger" course?
If you're jealous that I get paid for this, don't fret too much, because for the next two weeks you can get into Mesa Verde for free. This is because the Spruce Tree House is closed for reconstructing the trails, and isn't scheduled to be complete for a few weeks. 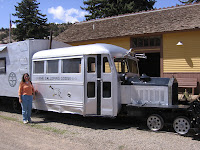 On Saturday, we made the short drive north to Dolores to see the Galloping Goose. The Engineer came out from the station and graciously opened the museum for us. He was very informative, explaining both the interesting history of the Goose, but also information of the upcoming railroad events in Colorado. His enthusiasm was contagious, and his excitement stemmed from their great work in restoring Goose No. 5 to operating condition. It's small enough to be transferred by truck to the D&S and Cumbres & Toltec narrow gauge rails, so we are looking into riding the rails once again. 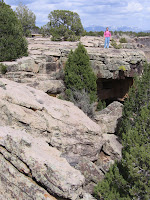 From Dolores, it's a short drive to the excellent Anasazi Cultural Center, which contain many exhibits and have a short trail up the hill to the ruins of Escalante Pueblo. The receptionist at the museum was also very friendly and helpful, providing us with much information about the Canyons of the Ancients National Monument that extend all across the area. So we spent Sunday afternoon exploring the ruins nearby. The first site is Sand Canyon Pueblo, which is seldom visited. We were all alone, except with the snowy head of Sleeping Ute watching us from over the ridge. Sand Canyon is archeologically very important because it was one of the largest pueblos in this region (bigger than Cliff Palace) and one of the last pueblos to be occupied, being abandoned around 1280 AD. Most of the walls have crumbled, and archeologists chose to rebury rather than reconstruct the ruins in order to preserve them. After that, we spent a short hike along the Hawkins Preserve trail, which contains several archeological sites. I was very excited to find a pottery shard along the trail! We took some macro photos of the nondescript shard and placed it back where we found it, near some spoil heaps just south of the main pueblo. We found out later that shards are not uncommon along the trail, and that we are indeed to never remove an artifact. In general this is very excellent advice: never remove historical artifacts from where you find them (unless they are in immediate danger).

We spent the evening sipping wine and reviewing the day, watching Canadian Geese, Coots, and Buffleheads swim in the pond below and recalling the Golden Eagle that was just down the road. The Buffleheads will soon be gone, and thus mark the end of spring.
Posted by Mangrove Tom at 9:38 PM