Lionfish: the other white meat! 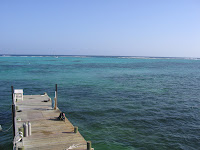 Just 10 years ago, researchers noted the presence of about 10 lionfish scattered across the east coast of the United States. There was concern that the lionfish would become invasive, and within a few years, hundreds were being seen along the coast of the Carolinas and northern Florida. While I was living in the Florida Keys in 2007-2008, there was alarm the lionfish was coming, but I never saw them in my dives around Big Pine and Key West.

This past March, my Dad invited me along on a diving trip to Little Cayman Island, and I saw first hand the power of of the sigmoid curve of unchecked population growth. We saw several lionfish on every dive, so clearly the population is thriving. The good news is that lionfish are a beautiful addition to the reef: it is their exotic and striking looks that made them a hit with the aquarium trade, which likely resulted in the contamination of the east coast by dumping unwanted adult fish.

The bad news: they are voracious predators, especially of juvenile fish. They will clearly have economic impacts to the grouper and snapper fisheries, and ecological impacts could be more devastating if they can exploit coral reefs in preferential ways. The immediate problem is that there are no predators that view them as a food source, except people brave enough to avoid their poisonous spines and fry em up.

Researchers have been looking into training reef sharks in the Atlantic to prey on lionfish, since 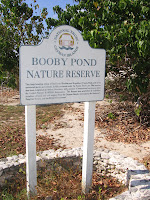 sharks are their natural predators in the Pacific. This is proving difficult, apparently because sharks make crappy students. The dive team at Little Cayman Beach Resort have found some willing students: the friendly, and sometimes lovable, Nassau Grouper. Some of the grouper are excited to see scuba divers enter the water. They swim over to greet the divers and follow them around like a puppy dog. Some are so friendly, they have been given names, such as Benji and MiniMe. When the dive masters encounter a lion fish, they point it out to the grouper, which then chomps it down in one bite! Hopefully, the grouper will learn that lionfish are prey and help balance out the current unchecked population growth.

One problem with this scenario is the Nassau Grouper is often overfished. For the past 7 years in the Caymans, the Nassau has been under limited protection on Little Cayman due to devastating overfishing, but those protections are set to expire. Please sign this petition to inform the Cayman Island government that protecting the Nassau Grouper from over-exploitation is in the best interest of everyone: including the fisherman... and ultimately even the lionfish. If anything exploits a resource to the point of an ecosystem crash, everyone loses. 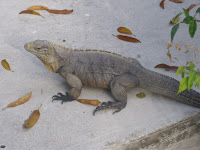 We had a great time in the Caymans, and saw many wonderful sights. We saw so many hawksbill sea turtles, we became acclimatized to swimming along an endangered species. Coral reefs are just a riot of strange colors and shapes, but with some practice we began seeing more and more each dive. The island itself had its own set of rare animals, such as island tree snails, lion-tail lizards, and rare rock iguanas. I was also lucky enough to add two birds to my lifelist: the largest colony of Red Footed Boobies in the Caribbean and a Bananaquit in need of voice lessons. On unrelated news: I'm returning to Mesa Verde National Park for another season!
Posted by Mangrove Tom at 12:28 PM