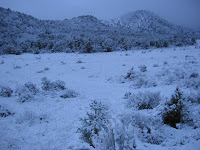 It's good to be back in the four corners once again. The mountains are still sleepy with snow on their shoulders, and it snowed on my first day of work! On the day we arrived, it was very windy and "Arizona came to visit", which is how the locals describe the dust storm that accompanies the strong southwest winds.

This season, there are only 4 members on the vegetation crew, but we have a new ecologist to help direct the program. Our immediate goals are focused on surveying for rare plants, especially in areas where the public may visit. We hiked the Petroglyph Trail to view some Wild Parsley and Cliff Palace Milkvetch. A short trail to an overlook of Cliff Palace may also be created, and we will consult the trail crew on 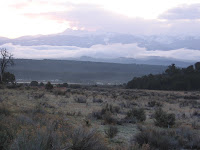 how to route the overloook trail to prevent Cliff Palace Milkvetch and Townsend Daisies from being lost.

Especially exciting was our hike down to Square Tower Ruin. It is an iconic ruin, but previously only visible from an overlook. This year, archeologists are considering opening up a trail for the public to tour it this summer. There are many rare plants along the trail, including an endemic variety of stickseed (Aletis MacDougalli) and Schmoll's Milkvetch. Our goal is to monitor those populations, since it is inevitable some will become trampled. 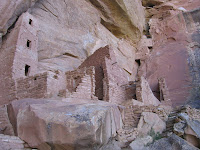 Visiting Square Tower ruin from below was a real treat, since it is still so much intact without restoration. A kiva with its roof still intact and some plaster on the walls can be seen. Rock art and sherds are still present, and some of the rooms are painted. The enigmatic Crow's Nest ruin can also be seen much better from below, perched above the tower. I found a Packrat's nest underneath a boulder who had smuggled out an ancient corn cob. Ironically, it's a raven that nests in an alcove above Crow's Nest.

So this first week has been a great start to the season, and it looks like I'll learn a LOT more plants this year -- the good ones, not the bad ones.
Posted by Mangrove Tom at 9:56 AM