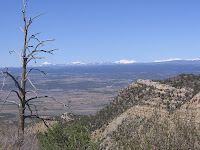 Work is progressing swiftly. The wildland firefighter red-card refresher course was held last week, along with the dreaded pack test. Fortunately, my flat-lander feet could keep up the pace and finished in plenty of time. Whew! While I was off doing that, my coworkers were assisting a botanist from the University of Colorado's state Natural Heritage Program. They visited several pre-existing study sites and inventoried the plants they found. The exciting news is they may have found a new species of Astragalus to add to Mesa Verde's species list. It's preliminary, but if they are positive in their identification, they hope to submit a voucher for it. 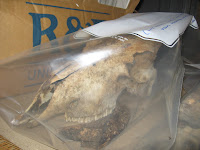 I suppose to counter a possible first, I should include a photo of a definite last. This skull is the last known Desert Bighorn to have lived in Mesa Verde. The wildlife biologists are still hard at work to attempt a reintroduction, and perhaps soon the bighorn will be seen once again along the cliffs of Mesa Verde.

This year, there is much more emphasis in qualitatively analyzing the native flora, as well as accurately mapping out weed infestations. Dare I say, I have been blind-sided by science. The new crew is well versed in botany, so I need to catch up so that I can contribute what I can. 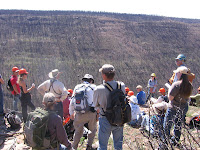 To help me gain some traction, I attended a field trip this past Friday to Narraguinnep Canyon Natural Area. In a rare moment of political precognition, these natural areas were set aside to serve as reference types for a particular ecosystem. Therefore, Narraguinnep can be studied to understand what a "natural" (as natural as humanely possible) Ponderosa ecosystem should look like. Of particular interest in this area is the realization that old growth Ponderosa forests are the best defense against forest fires, much like a mangrove hammock resists the destruction of a hurricane.

I'm slowly learning my plants, so be prepared for more latin words and a "Plant of the Week". 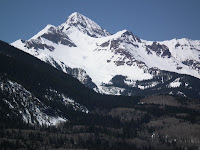 Today's plant of the week is Lithophragma parviflorum the Woodland Star. It is common saxifrage upon the mesa tops, and blooming now. It also highlights why I need to learn the real names of plants, because another common plant Lithophragma glabrum, also called Woodland Star, is a different species, which can be distinguished by tiny, red buds along the infloresence. There will be a quiz later!

For a weekend reprise from plant ID, we went to see the mountains still buried in snow and hunt down a few geocaches. The highlight was seeing Cornet Falls breaking free of its icy prison.